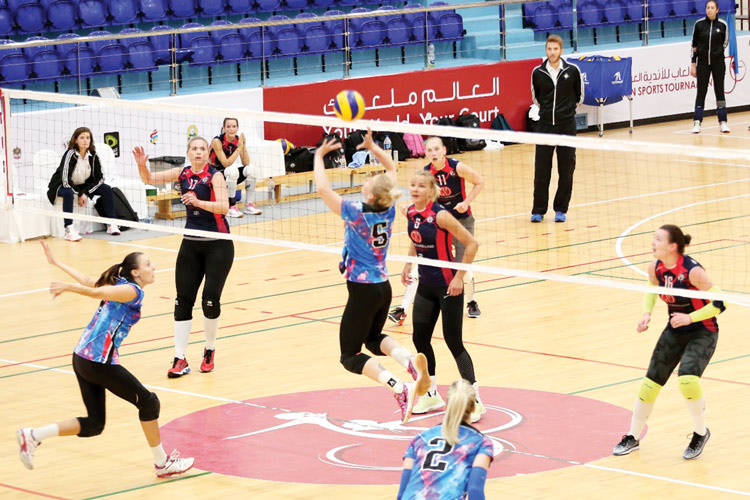 Players vie for ball during the Ramadan Women’s Sports Tournament.

The tournament which runs until May 14 is held under the patronage of Her Highness Sheikha Jawaher Bint Mohammed Al Qasimi, wife of His Highness Dr Sheikh Sultan Bin Muhammad Al Qasimi, Supreme Council Member and Ruler of Sharjah, and Chairperson of SWS.

The Sharjah Women’s Sports Club won the bronze medal, beating the Wildcats team 3-0 for the third place. The medals will be presented to the winning teams at the closing ceremony of the tournament on Tuesday.

Marko Mitrovic, head coach of Elite Volleyball Academy team, said: “The finals was a very tough game and we are happy with this well-earned trophy. Through this competition, the team was able to gain much experience by competing against other talented teams.”

He added that the tournament was in line with the goals of the Elite team, which seeks to promote women’s sports in general and introduce people to volleyball.

“The tournament is a huge success. It brought together friends and families during the holy month of Ramadan in a very organised manner.

“I would like to thank Sharjah Women’s Sports for organising this wonderful sporting event,” he added.

Commenting on winning the gold medal, Tatjana Matic, Elite Volleyball Academy Ladies team player, said: “The final game was very tough and challenging like the rest of the games. It encouraged the players to work harder. We gained a lot of experience from the competition that will be beneficial in future games.”

“This year we have seen outstanding matches, new players and strong teams taking part in the games which added to making the event a big success.”

“The 11th edition of the Ramadan Sports Tournament kicked off in Sharjah on May 8, with basketball, volleyball, archery and shooting competitions being scheduled during the seven-day event,” said Fatima Ahmed Saleh Mohamed, Assistant Manager Communication and Business Management Section with Sharjah Women Sports.

“The popularity of the event has been rising steadily over the years and this year too, more than 330 athletes are participating in the tournament, representing 25 teams.

“The strategic sponsors of the event are the Sharjah Sports Council, whose various initiatives to give a boost to sporting excellence among athletes of all ages – including events such as the ongoing Ramadan Sports Tournament – are bearing fruit.

“Many young athletes are being groomed to excel in national, and regional competition across sports disciplines,” she added.