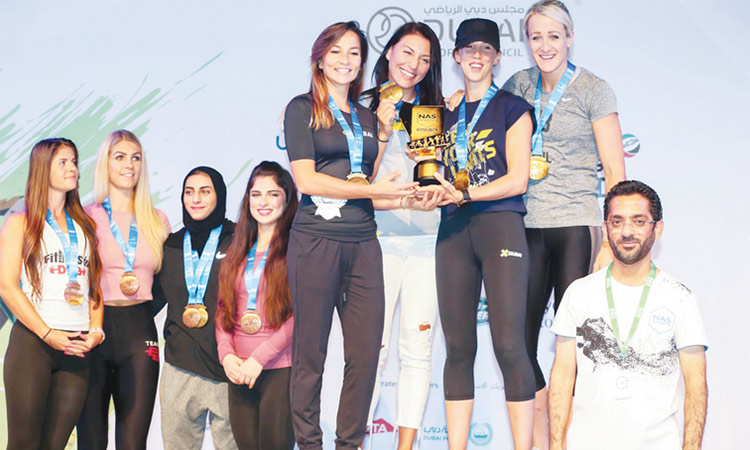 Winners of the NAS Running Challenge celebrate after the presentation ceremony.

Moroccan Anouar El Ghouz and Betlhem Belayneh of Ethiopia won the men’s and women’s title respectively in the 10km professional category of the NAS Running Challenge, which saw more than 1,600 runners of different age and nationalities take part.

“This is the first time I am participating in the Nad Al Sheba Running Challenge, and it was really difficult race because of the weather and the quality of the runners,” said Dardour. “There were some really good runners from Kenya and Uganda in the race, so it is really pleasing for me to finish ahead of them. I am definitely looking forward to coming back next year to defend my title.”

Ten-years-old Sheikha Al Najjar was the youngest participant in the NAS Running Challenge, competing in the 5km race. She had taken part last year as well, in the 10km race alongside her father, and, impressively, finished the race.

“I run 3km three times a week,” said Al Najjar, who is part of Ajman club’s Jiu-Jitsu team. “This year, I decided against taking part in the 10km race on the advice of a Moroccan runner last year. She asked me to take part in the 5km race instead because it is better suited to my age.

“So I asked my father to register me to run alongside him in the 5km race. I managed to complete the distance without any problems and I am really pleased with that.”

In the NAS Cricket tournament, Noor Bank and Mideast Metals kept alive their hopes of qualifying for the knockout stage with emphatic wins on Saturday night.

Beaten by Abu Dhabi Tigers in their first match, Noor Bank bounced back to defeat Chalhoub Group by 51 runs and will now await the result of the final Pool 2 match between the Tigers and Chalhoub.

Mideast Metals, who had lost to Hadaf Sporting RAK in their opening match, defeated Wolfpack Cricket Club by 47 runs to earn a bonus point. Their fate, however, will depend on the result of the final Pool 3 match between Hadaf and Wolfpack.

There are 24 eight teams taking part in the tournament. They have been divided into eight group of three each, and the top team from each group will qualify for the quarter-finals. Dubai Exiles RFC already confirmed their place in the last eight from Pool 1 with two wins from two matches.

The NAS Futsal Championship for People with Hearing Disabilities started on Saturday at UAE Football Association in Al Khawaneej with four teams – Dubai A, Dubai B, Abu Dhabi and Al Ain - in the fray.

In the first match, Dubai A prevailed 4-3 over Al Ain in a keenly-contested match with Omani Abdulrahman Al Khudri scoring twice for the winners, and Bahrain’s Akbar Salman and Waleed Khalid once each. Oman’s Abdullah Mubarak scored two for Al Ain and Abdulrahman Abdo a third.