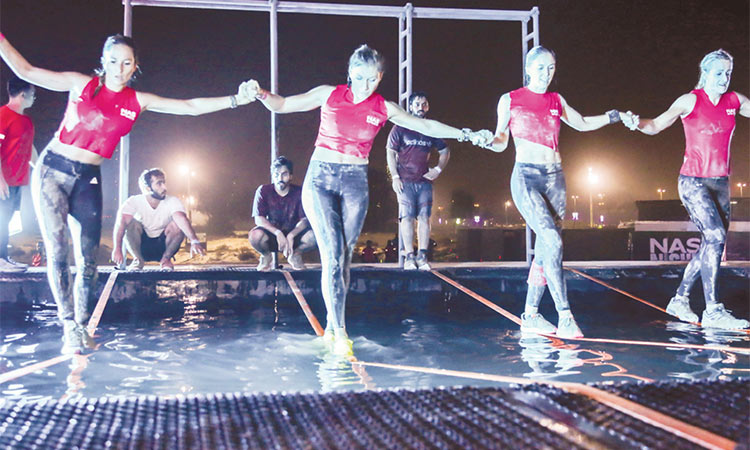 Participants in action during NAS Night Challenge event on Thursday.

Major General Abdullah Khalifa Al Marri, Commander-in-Chief of Dubai Police, was delighted to see the turnout for the first leg of the NAS Night Challenge on Thursday night and is looking forward to seeing even bigger numbers at the starting line for the second leg.

More than 1,000 obstacle-race enthusiasts, representing 52 different nationalities, took part in the Team events of the NAS Night Challenge, which has been a popular part of the Nad Al Sheba Sports Tournament over the past three years. A greater number of participants are expected to take part in the second leg of the Challenge, which is for individuals, on May 16.

“We are happy to see so many people from so many different nationalities taking part in the NAS Night Challenge,” said Marri. “Their enthusiasm and team spirit is really contagious and I am confident we are going to see much larger numbers in the second leg this coming Thursday.

“The NAS Night Challenge fulfils one of the top objectives of the NAS Sports Tournament – to attract participants from all segments of our diverse community and encourage them to embrace a physically active lifestyle. The opportunity to challenge yourself and overcome these obstacles – 14 obstacles across a 4km course for this year – is a great incentive for people to participate.”

Dubai 2021, the 2015, 2016 and 2018 champions, are through to the semi-finals of the NAS Sports Tournament following their 3-1 win over Bin Thani 3-1. Dubai 2021 will go through as the top team from Group B with two wins from two games as they had defeated Al Burkan 3-1 on the opening night of competition.

In Group A, Fohood Zabeel, have kept their qualification hopes alive with 3-1 win over Dubai 2020. Foohood Zabeel were beaten 2-3 in their opening game by 2017 champions Surprise.

In the NAS Cricket T10 tournament, Bilal Azmat’s fine all-round performance was in vain as Wombats Cricket Club, the hosts of the tournament, lost to MGM Cricket Club Sharjah by 17 runs.

Azmat first took two of three MGM wickets to fall as they put a daunting 161-3 on the board, thanks to a majestic unbeaten 81 from Mohammed Hassan. The opener scored his runs off 30 balls, smashing eight huge sixes and four fours.

Wombats got off to a poor start in their chase, losing their top four with only 34 on the board. Azmat then walked in to join A Ansari (48 runs, 15 balls, 1x4, 6x6) at the crease and together they took the score to 92 before Ansari departed. Azmat continued the fight, but in vain and Wombats eventually finished on 144 for 8, with Azmat getting out in the final over for a 22-ball 49 (3x4, 5x6).