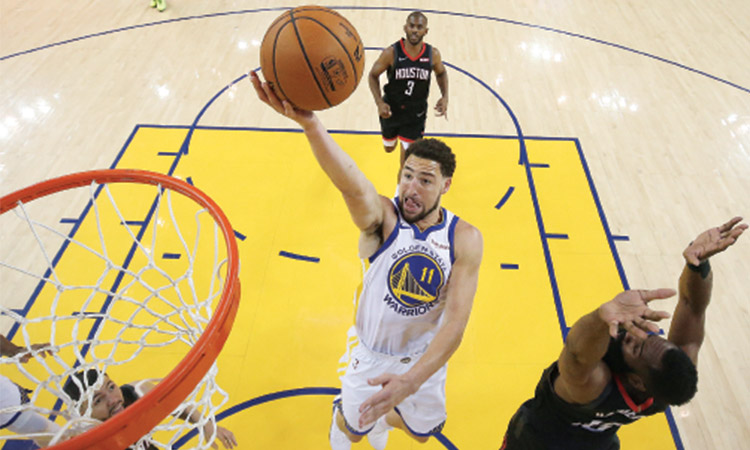 Golden State pulled out a 104-99 victory over the Houston Rockets on Wednesday as the Warriors survived the loss of superstar Kevin Durant to grab a 3-2 lead in their second round NBA playoff series.

Draymond Green and Klay Thompson nailed clutch three pointers late in the fourth quarter for the Warriors but the buzz after the game was not about the win but rather the health of Durant.

The Warriors said he had suffered a right calf strain but Durant is expected to undergo an MRI scan to Thursday to determine the full extent of the damage. Warriors coach Steve Kerr sounded cautiously optimistic -- hoping for the best but also preparing for something worse if it does turn out to be more serious like a ruptured Achilles.

“We are all disappointed for him. Excited about the win but concern for Kevin. He had been on this incredible playoff run. I am proud of the guys and the way they pulled out this win and we will see about Kevin tomorrow,” said Kerr.

Durant’s injury occurred innocently enough after he hit a jumper from the right side with just over two minutes left in the third quarter.

He took a step forward then grimaced in pain and looked down at his lower right leg.

“He’s done a lot for us. We got to have his back -- that is what tonight was about,” said Warriors Stephen Curry.

Thompson finished with 27 points, Curry 25 and Durant 22 for the Warriors, who continued a run of home wins by the teams in the series.

James Harden was the game’s leading scorer with 31 points for the Rockets, who were outshot by the Warriors from the field 46 percent to 42 per cent.

Elsewhere, Milwaukee became the first team to reach the NBA’s final four as the top-seeded Bucks beat the visiting Boston Celtics with a 116-91 series-clinching victory.

The Bucks used balanced scoring and a stingy defense to eliminate the fourth-seeded Celtics in five games, avenging a seven-game first round loss to Boston last season.

“It’s amazing. It was a team effort,” said Antetokounmpo. “We did not mess around with the game. We did our job. We defended. We moved the ball. That’s how we were able to close the game.” The Celtics had reached the NBA semi-finals against the Cleveland Cavaliers each of the last two seasons.