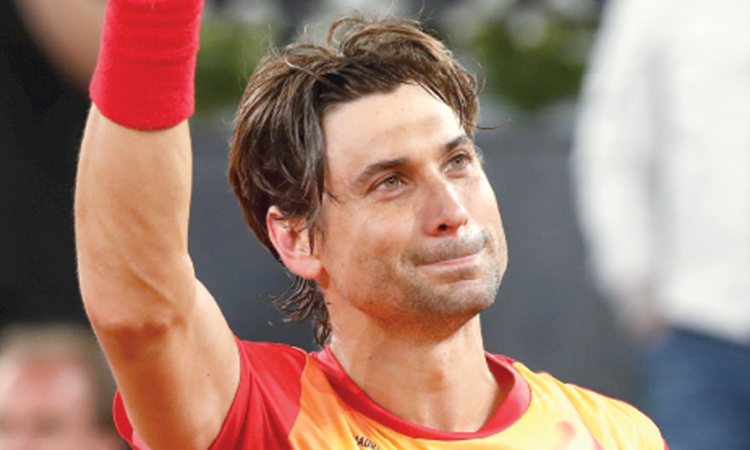 David Ferrer waves to the fans after playing the last match of his career against Alexander Zverev at the Madrid Open on Wednesday. Agence France-Presse

Halep, who has been struggling with injury, took the opening set and went up a break in the second before losing it against the ninth-seeded Australian who won the Miami title in March.

Halep regained control with a break for 6-5 as her opponent returned wide. She wrapped up victory with an untouchable forehand to the corner.

“It’s not easy to keep winning here,” Halep said after a victory in which she broke four times.

“But I’m very motivated after reaching the semi-finals again. I will have another challenge tomorrow (Friday), so I’m not looking any further ahead than that.

“If I can play my best tennis, then we will see,” added the player who advanced through her third-round match on Wednesday without the loss of a game.

Meanwhile, Ferrer bowed out after losing to Zverev, calling time on a distinguished career that included 27 ATP titles and a highest ranking of number three in the world.

Renowned for his never-say-die attitude, the 37-year-old reached the French Open final in 2014, as well as five more Grand Slam semi-finals.

“I couldn’t have given more to this sport,” said Ferrer, who left his bandana on the ‘T’ of the service box.

“I don’t know what my legacy will be but I always fought until the last point. Maybe it will be that.”

Juan Martin del Potro lost 6-3, 2-6, 7-5 to Serbia’s Laslo Djere in his first match since February as the Argentine continues to work his way back from a knee injury.

Federer trailed 4-2 in the deciding set before levelling at 4-4. The 20-time Grand Slam winner then saved match points in the 12th game before sweeping through the tiebreaker to record his 1,200th career win.

Federer, playing his first clay court tournament in three years, will face Austrian fifth seed and recent Barcelona champion Dominic Thiem on Friday for a place in the semi-finals.

Earlier, Novak Djokovic defeated Jeremy Chardy 6-1, 7-6 (7/2) on Thursday at the Madrid Open to extend his domination of French opponents.

The Serb top seed needed less than 90 minutes to reach the quarter-finals at the Caja Magica, beating Chardy for the 13th time in as many attempts.

Djokovic holds an overwhelming record against the French, standing 66-2 against them since leading Serbia to the 2010 Davis Cup title over France.

Djokovic, the Madrid champion in 2011 and 2016, is searching for his top clay form as he begins the chase a fourth straight Grand Slam title when Roland Garros starts in little over two weeks.

He secured the opening set in less than half an hour, but was forced to a tiebreaker as Chardy’s resistance stiffened in the second.

Romania’s third seed and former world number one will next play the winner from top seed Naomi Osaka and in-form Swiss Belinda Bencic.

Belinda Bencic knocked top seed Naomi Osaka out in the quarter-finals of the Madrid Open on Thursday with a 3-6, 6-2, 7-5 comeback win.