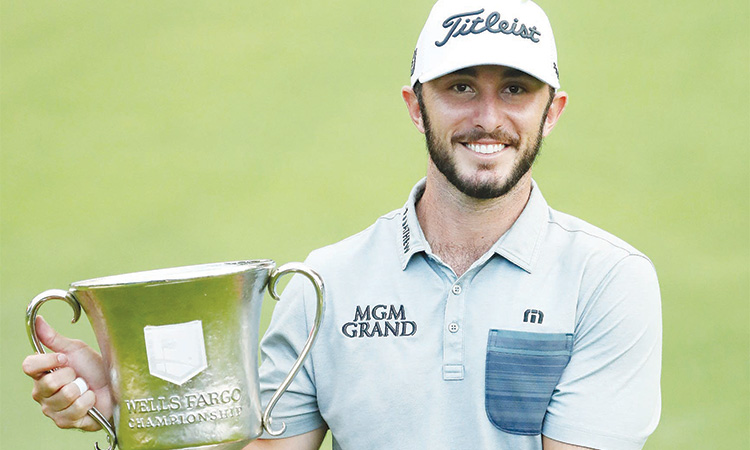 Max Homa poses with the trophy after winning the Wells Fargo Championship in Charlotte on Sunday. Associated Press

Homa fired a four-under par 67 at Quail Hollow to finish 72 holes at 15-under 269 on the Charlotte, North Carolina, layout.

The world number 417’s best prior US PGA finish came when he took a share of sixth at the 2015 Sony Open in Hawaii.

Joel Dahmen, another American seeking his first US PGA title, was second on 272 after a closing 70 with world number two Rose of England third on 273 and Spain’s Sergio Garcia, England’s Paul Casey, American Rickie Fowler and his countryman Dufner all sharing fourth on 275.

Four-time major winner McIlroy, twice a champion at Quail Hollow, was a threat entering the final round but struggled to a 73 to share eighth on 277.

Homa reached the turn in the lead by one at 13-under after Dahmen closed the front nine with a bogey, with Rose, Dufner and Garcia lurking three back.

Three consecutive par putts from just over five feet kept Homa’s lead intact, the last of them coming at 14 after a rain delay drenched the course.

Homa two-putted from 65 feet at the par-5 15th for a four-stroke lead but found a fairway bunker at 16 on the way to a bogey that left him three up with two to play.

McIlroy, this year’s Players Championship winner, could not summon a charge, settling for pars on seven and eight and falling out of contention with a bogey at nine and double bogey at 10.

Elsewhere, South Korea’s Kim Sei-young shook off a disastrous start to win the LPGA Mediheal Championship in a playoff Sunday, beating Bronte Law and Lee6 Jeong-eun with a birdie at the first extra hole.

Kim began the day with a three-shot lead at Lake Merced in Daly City, California.

She fell to six-under for the tournament with a bogey at the eighth, and Law and Lee were in the clubhouse on 281 before Kim made her first birdie of the day at the par-five 15th to join them on seven-under.

Kim surrendered her share of the lead with a bogey from a bunker at the par-three 17th, but forced her way into the playoff with a birdie at the par-five 18th, capping a three-over 75.

The trio returned to the 18th, where all three found the fairway.

Lee -- who uses the numeral 6 to distinguish herself from other players of the same name who played on the Korean ladies’ tour -- put her second shot on the back of the green but couldn’t make birdie from there.

Law missed the green, and her third shot left her a mid-range birdie attempt which she missed.

Kim’s playoff hole was almost a carbon copy of her birdie in regulation, her second shot landing just off the front of the green. Her putt from there left her a two-footer for a birdie.