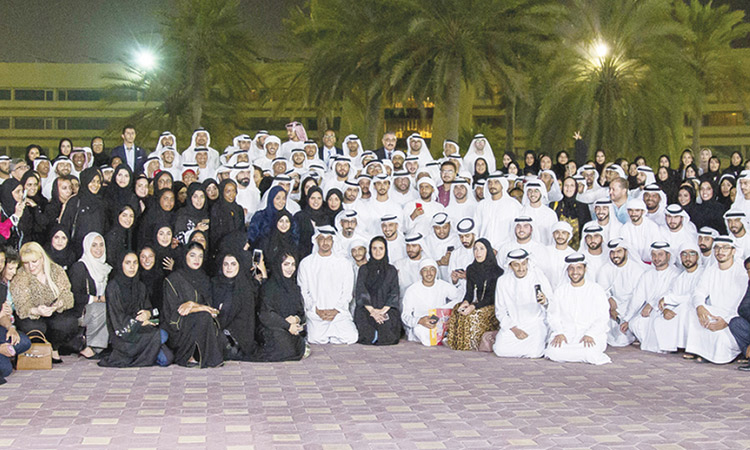 The volunteers were being honoured at a special ‘volunteer recognition’ event held at the Armed Forces Officers Club in Abu Dhabi when Sheikh Mohamed arrived to thank them.

The youngsters, including people of determination, represented every segment of UAE society with male and female Emiratis and expatriates participating in a range of vital organisational, media and athlete-focused volunteer work during the Games.

Noora Al Blooki, a volunteer leader who confidently addressed the UAE and the world at the closing ceremony for the Games, helped to MC the ‘volunteer recognition’ event, which also featured speeches of thanks by Ameera Almuharrami, director, volunteers, and heartfelt testimonials by individual volunteers and awards handed out to outstanding volunteers.

The celebratory event was also attended by Noura Al Kaabi, Minister of Culture and Knowledge Development,  Mohamed Abdulla Al Junaibi, Chairman of the Higher Committee of Special Olympics World Games Abu Dhabi 2019, as well as Ministers, dignitaries from the UAE and officials of the Local Organizing Committee for Special Olympics World Games 2019.

The volunteers and dignitaries also posed for a group photograph to record their achievements at the Games. Meanwhile, the LOC of Special Olympics World Games Abu Dhabi 2019 is conducting meetings with key officials from Special Olympics International, Berlin and Sweden this week to help ensure the next World Games are a huge success, building on the legacy of the largest and most unified Games in the 50-year history of Special Olympics, which took place in Abu Dhabi this March.

The LOCs of Sweden 2021 World Winter Games and Berlin 2023 World Summer Games are in Abu Dhabi where they are being hosted by LOC of Special Olympics World Games Abu Dhabi 2019 for a two-day programme of knowledge transfer sessions. The programme will cover various topics through a series of workshops and discussions that look at what made the recent World Games such a success, promoting an inclusive world and creating a long-lasting legacy.

The Abu Dhabi World Games welcomed a record breaking 200 nations - the biggest number of participating nations for a World Games. This included 22 new delegations from Africa, Asia-Pacific, North America, the Middle East and North Africa, who were participating for the first time, and 5 observer nations.

The largest sports and humanitarian event of the year saw the UAE embrace societal change for people of determination and captured the hearts of millions worldwide through digital media and innovative technology.

Among the important points of discussion will be the unparalleled scale of the Games in Abu Dhabi, the extraordinary community engagement across the nation, and the unprecedented levels of awareness achieved around the world for the Special Olympics movement. Khalfan Mohammed Al Mazrouei, Managing Director of Special Olympics World Games Abu Dhabi 2019, said: “Hosting key officials from Special Olympics International and the Local Organizing Committees of the Sweden 2021 and Berlin 2023 World Games in Abu Dhabi is a crucial opportunity for us to share key learnings from this event and opportunities to capitalise on its success in the future.

“As an LOC, our priority has always been to create positive societal change for people of determination across the world. While the World Games are over, the UAE’s commitment to the importance of building a more inclusive world will continue, and this begins by helping future LOCs to ensure the next editions of the World Games are a success.”