McIlroy shares lead at Wells Fargo; Wu ahead in Shenzhen 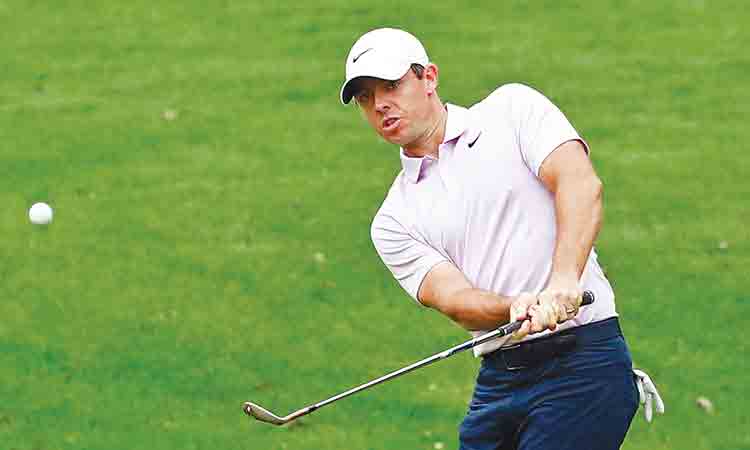 Rory McIlroy chips to the 15th hole during the first round of the Wells Fargo Championship in Charlotte on Friday. Associated Press

Los Angeles: Northern Ireland’s Rory McIlroy is back in his comfort zone at the Wells Fargo Championship, firing a five-under 66 on Thursday to grab a share of the first-round lead with Joel Dahmen.

McIlroy earned his first career USPGA Tour victory at the Quail Hollow golf course in 2010, and is the only two-time winner of the event.

After shooting even par on the front nine, McIlroy surged up the leaderboard on the back nine in Charlotte, North Carolina in five-under 31 with the help of five birdies over a seven-hole stretch.

McIlroy finished tied for 21st at The Masters this year after reaching the top 10 in seven straight PGA tournaments. During that stretch he captured his first Players Championship crown.

This is the fifth time McIlroy has led at the end of a round at Quail Hollow, which moves him past Tiger Woods for the most all-time.

Oddly, McIlroy didn’t hold the first-round lead in either of his Wells Fargo wins. He was five shots behind in 2015 and seven shots adrift in 2010.

Australia’s Jason Day, who is seeking to defend a title on the USPGA Tour for the first time, is at three under. He shot 68, including five birdies.

Day was paired with Phil Mickelson, who is tied for 47th after an even-par round of 71.

Elsewhere, Wu Ashun credited home comforts and “great food” for his scintillating form as he stormed to a second round seven-under-par 65 to lead by two strokes at the 25th Volvo China Open in Shenzhen on Friday.

Wu carded a season’s best 66 in Thursday’s opening round, and went one better with the low round of the day on Friday on his way to a 13-under par total.

He rammed home eight birdies and dropped just one shot to the delight of a large gallery of fans following his every move around the Genzon Golf Club layout.