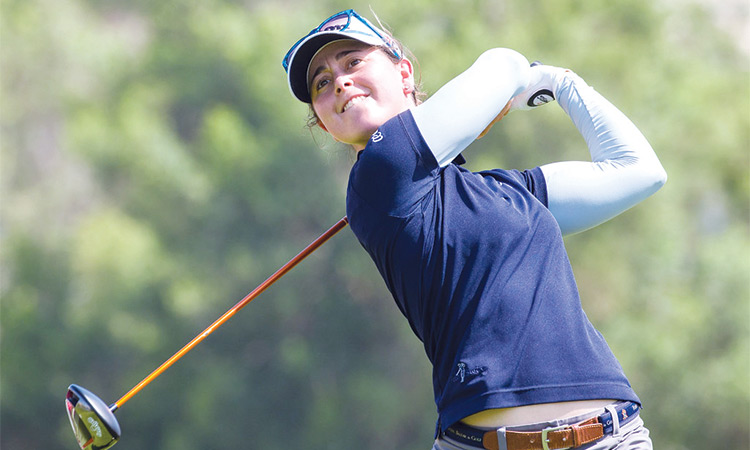 Nuria Iturrios hits a shot during the second round of the Dubai Moonlight Classic on Thursday.

German rookie Esther Henseleit lit up the Faldo Course at Emirates Golf Club with a sizzling six-under-par 66 to share the lead with Spain’s Nuria Iturrios on nine-under-par after the second round of the Omega Dubai Moonlight Classic.

The pair lead by one over Germany’s Olivia Cowan heading into the final round of the world’s first professional day-night tournament.

Germany’s Karolin Lampert, who played under the LET lights late on Thursday, lies in fourth place on six-under-par, with first-round leader Leona Maguire of Ireland in fifth on five-under.

Henseleit, Cowan, Lampert and Maguire are all looking for their maiden wins on the Ladies European Tour, while Iturrios, who won the Lalla Meryem Cup in Morocco for the second time last week, could become the first player to seal consecutive titles since Aditi Ashok won the Hero Women’s Indian Open and Qatar Masters in 2016. In recent history, Australians Stacey Peters (née Keating) and Nikki Garrett also achieved the feat in 2012 and 2007 respectively.

Henseleit, who held a +7.1 handicap when she turned professional in January, is an astronomical talent who has already posted four top-10 finishes from five starts on the LET this year.

In just her 20th round as a Ladies European Tour player, she made a flurry of eight birdies in her first 16 holes before making a double bogey on the par-3 17th.

Followers of the LET might have seen the round coming as she tied for third in the Investec South African Women’s Open and fourth in the Lalla Meryem Cup last week, rising to the summit of the Rookie of the Year rankings.

The 20-year-old from Hamburg, who is playing in her sixth tournament as a professional, is feeling confident and said: “My long game is really solid and my ball striking is really good, so my swing is feeling good. I just felt like I could attack some pins and also putted really well, so I had a lot of birdies. Sadly I had a double bogey on 17, which was not that good, but that happens. I’m still quite happy about my round.”

The 2017 PING Junior Solheim Cup player now has the chance to win her first professional title in only her sixth tournament and said: “It would mean everything. I think everyone wants to win and to do this in your first year is really good, but there is still one day to go and I’m not thinking of the win. I want to do my best and see what happens tomorrow.”

Iturrios carded a 68 to join Henseleit in the lead and she said: “I made two birdies from really good bunker shots on holes 10 and 13, where I can reach the greens in two. I love bunker shots, so that’s fine for me. I made some putts and missed some, so we’ll see for tomorrow.”

On her chances of earning consecutive titles, the 23-year-old from Palma de Mallorca added: “It would be awesome, of course, but there’s still 18 holes to play and you never know. It’s golf, so I want to enjoy it.”

Cowan, 23, from Hamburg, who had four birdies in her second round 70, said that it was very different playing in the day time, from the night: “It was really hot today, so it was a bit different from yesterday. I played really well, again. I made a few stupid mistakes, which cost me a bit, but otherwise I’m happy with the day.

“Yesterday was a lot cooler and it’s probably better to start in the afternoon, actually, because the first hour, it’s quite hot, but then it cools down pretty quickly. Today it was really hot, from 8.30am in the morning.”

Maguire is still in the hunt, despite her bogey at the 17th and double on hole seven. She said: “I didn’t give myself many chances today. On seven, I wanted to hit 7-wood, my caddie wanted me to hit an iron and I hit an iron in the water, which was quite annoying to finish with. I didn’t give myself enough chances and didn’t hole any putts, so no birdies today. I need to play a lot better tomorrow and hit my irons better to give myself some more chances.”

The final round gets under way from 10:59 local time on Friday.