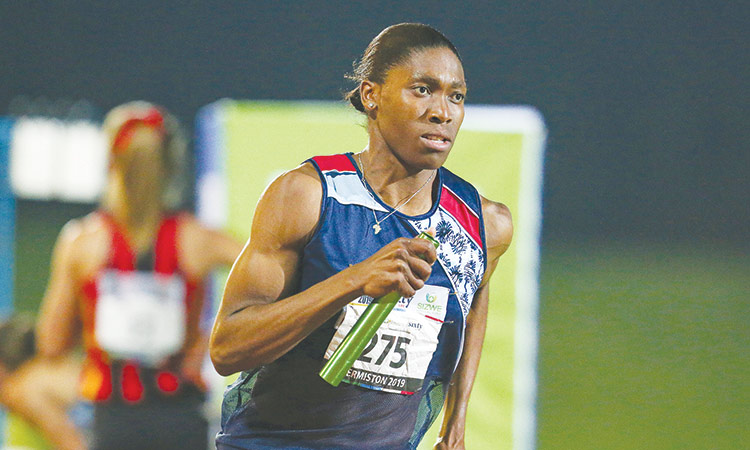 South Africa’s Caster Semenya competes in the 5,000 metres at a meeting in Johannesburg on Apr.27. File / Reuters

South African runner Caster Semenya on Wednesday lost her court challenge against IAAF rules forcing female athletes to regulate their testosterone levels, but judges voiced concern with the application of the “discriminatory” regulations.

Semenya, a double Olympic champion, was fighting measures imposed by the International Association of Athletics Federations (IAAF) that compel “hyperandrogenic” athletes -- or those with “differences of sexual development” (DSD) -- to lower their testosterone levels if they wish to compete as women. A three-judge panel at the Court of Arbitration for Sport said even though the rules are “discriminatory...such discrimination is a necessary, reasonable and proportionate means of achieving the IAAF’s aim of preserving the integrity of female athletics in the Restricted Events.”

But the three judge-panel voiced “serious concerns” about the viability of rules moving forward.

The IAAF said it was “grateful” for the CAS ruling and that the rules -- first adopted last year but suspended pending the legal battle -- will come into affect on May 8.

“Sometimes it’s better to react with no reaction,” Semenya said on Twitter after the verdict was announced.

But her advocates -- which include a global coalition of nations, scientific experts and human rights defenders -- are certain to be less restrained.

The IAAF insisted the rules were essential to preserve a level playing field and ensure that all female athletes can see “a path to success”.

The governing body has stressed that DSD athletes with male levels of testosterone benefit from increased bone and muscle size in a manner similar to males who have gone through puberty.

Although they rejected Semenya’s appeal, the judges urged the IAAF to treat their DSD regulations as a “living document,” which could be continually revised as they are applied and new information about their impact becomes clear.

Experts have argued that achieving excellence in sport is a combination of training and commitment as well as genetics and that barring people from competition over a single genetic factor has no scientific basis. In a rare intrusion into the world of sport, the United Nations Human Rights Council adopted a resolution in March branding the IAAF rules “unnecessary, humiliating and harmful”.

The two athletes who finished behind her in the Rio Olympics 800m, Francine Niyonsaba of Burundi and Kenya’s Margaret Wambui, have also faced questions about their testosterone levels.

Semenya took potential steps to reinvent her career last week when she won the 5,000-metres at the South African Athletics Championships in a modest time of 16:05.97, an event that would allow her to compete outside of the IAAF regulations.

Following the CAS case, other sporting bodies may now choose to set their own parameters for participation by DSD and transgender athletes in their individual codes.

Semenya has 30 days to appeal, in a challenge that would be heard by the Swiss Federal Tribunal.

Meanwhile, Britain’s Mo Farah has turned down the chance to contest the marathon at this year’s world championships in Doha, increasing the possibility of a return to the track. Farah, who finished fifth in Sunday’s London Marathon, had been eligible for selection for the British team, but has opted to decline his place.

The 36-year-old four-time Olympic champion could now target a fourth successive world title over 10,000 metres instead, having claimed gold in Moscow in 2013, Beijing in 2015 and London in 2017.