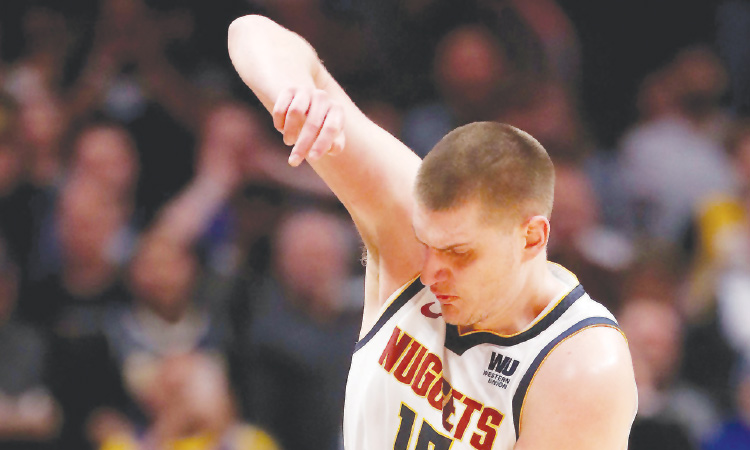 Denver Nuggets’ Nikola Jokic (15) in action against the Portland Trail Blazers during game one of the Western Conference semi-finals on Monday. Agence France-Presse

Jimmy Butler scored 30 points as the Philadelphia 76ers turned the tables on the Raptors in Toronto on Monday with a 94-89 victory that knotted their NBA playoff series at one game each.

The 76ers, beaten 108-95 in the Eastern Conference second-round series opener, thwarted the Raptors’ second-half comeback bid, notching their first win in Toronto since November 2012 to head home for game three on Thursday all square.

Butler added 11 rebounds and handed out five assists for the Sixers, who led 51-38 at halftime despite 13 first-half turnovers.

The Raptors, who trailed by as many as 19 in the first half, closed the deficit to 61-60 late in the third quarter. But they missed six of their first seven shots in the final period and the 76ers held on for the win.

Butler scored 12 of his 30 points in the fourth quarter. That included a three-pointer off an assist from center Joel Embiid that put the Sixers up 88-81 with 2:14 to play.

“My team had a lot of faith in me tonight,” said Butler, who scored just 10 points in game one. “I told them I had to come out and redeem myself.

“More than anything we got back, we guarded,” Butler added, saying defense would be key going forward in the series.

Embiid, battling a stomach ailment as well as the nagging knee pain that troubled him in the first round, scored just two baskets. The second couldn’t have been better timed as he drove to bank in a shot that put the 76ers up 92-89 with 24.3 seconds remaining.

But the five total points for Toronto’s reserves were dwarfed by the production of Philadelphia’s bench: 13 points from James Ennis, 10 from Greg Monroe and three from Jonah Bolden.

The Denver Nuggets, two days removed from their first-round, game-seven victory over the San Antonio Spurs, opened their Western Conference second-round series with a 121-113 home victory over the Portland Trail Blazers.

Portland’s CJ McCollum was then whistled for a flagrant foul when he caught a driving Jokic in the face, and the Serbian made both free throws.

Plumlee then slammed home a miss by teammate Malik Beasley and Beasley rebounded another miss and made a layup as the Nuggets seized a 109-96 lead with 6:11 left to play.