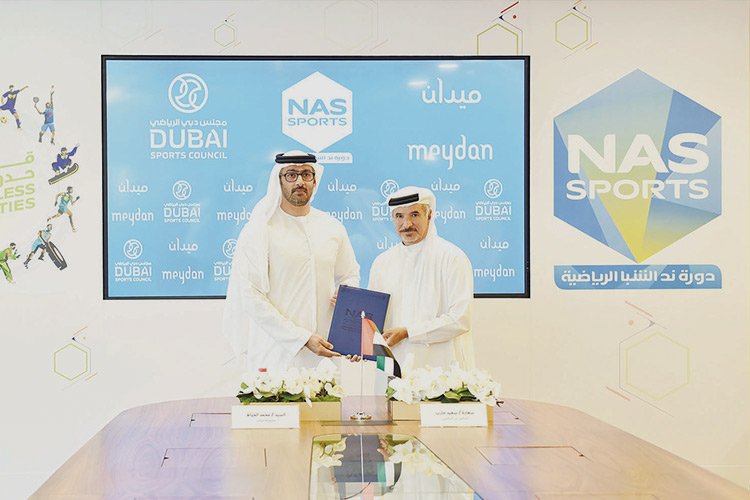 Saeed Hareb and Mohammad Abdul Nasser Al Khayat at the official signing of the sponsorship agreement.

Meydan — a visionary concept of His Highness Sheikh Mohammed Bin Rashid Al Maktoum, Vice President and Prime Minister of UAE and Ruler of Dubai — have reiterated their support for the Nad Al Sheba Sports Tournament.

Following the agreement Meydan will be one of the event’s diamond sponsor for this season.

Host of world horseracing’s biggest night, the Dubai World Cup, and one of the biggest names in Dubai’s real estate and hospitality sectors, Meydan Group signed an agreement with Dubai Sports Council (DSC) to sponsor the tournament, which has become the biggest of its kind in terms of participation and prize money.

“Meydan have been one the staunchest supporters of the NAS Sports Tournament,” said Hareb. “They have been sponsoring the tournament since the first edition and we are really pleased to announce the continuation of this remarkable partnership.

“The renewal of this partnership confirms Meydan’s strong and generous support for the sports sector, which goes beyond hosting the glamorous Dubai World Cup horseracing extravaganza at the magnificent Meydan Racecourse every year.

“This partnership is also a reiteration of Meydan’s commitment to our diverse community and it will go a long way in spreading the message of healthy-living, and also encourage members of our community to embrace sports and a physically active lifestyle.”

Organised under the patronage of Sheikh Hamdan Bin Mohammed Bin Rashid Al Maktoum, Crown Prince of Dubai and Chairman of Dubai Sports Council, the NAS Sports Tournament has been held every year in the Holy Month of Ramadan since 2013.