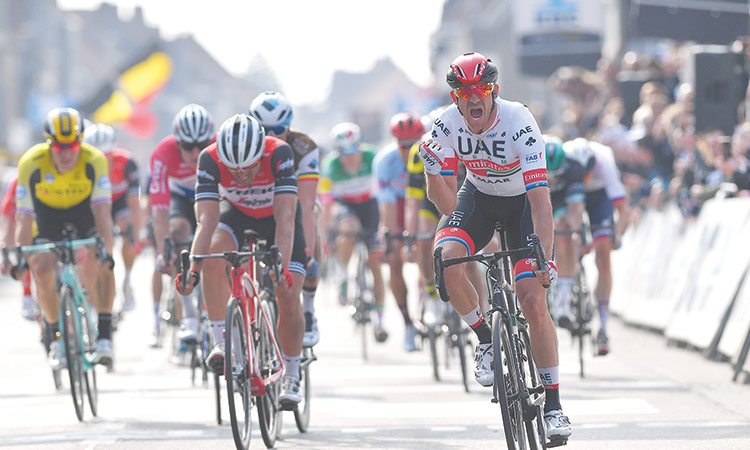 Alexander Kristoff will be looking to build on his top spot at Gent-Wevelgem and podium place at the Tour of Flanders when he arrives in Germany this week.

UAE Team Emirates’ Alexander Kristoff will look to retain his Eschborn Frankfurt title this week as he heads to Germany, captaining a strong line-up of riders hoping to continue the team’s fine run of form.

Kristoff has been one of the team’s best performers over the past two seasons and will be looking to build on his top spot at Gent-Wevelgem and podium place at the Tour of Flanders when he arrives in Germany this week.

The 58th edition of the race will see the peloton tackle eight categorised climbs  over a 187.5km route. Starting out in the Eschborn suburb of Frankfurt, the riders will head North-West and start the ascent to the first climb at just over 32km.

From there on, it’s a hilly route with relentless climbs for over 100km. However, should the peloton come over the final climb in a bunch, spectators can expect another thrilling sprint finish, in which UAE Team Emirates’ Kristoff has emerged victorious in four of the past five seasons.

Commenting ahead of the race, Kristoff said: “Four successes in a row make this race a special event for me. I have many great memories that are added year after year. I think I can be so competitive in this race because we usually reach the sprint after a very intense event. I can’t ask for anything better given my characteristics.”

Whilst Kristoff and the team fight for one-day honours in Germany, former World Champion Rui Costa will lead a UAE Team Emirates line-up across seven stages at the Tour of Romandie (April 30 to May 5).  The Portuguese all-rounder has finished in the General Classification (GC) top 10 a remarkable five times, and will be counting on the support of his team-mates Simone Consonni, Edward Ravasi, Simone Petilli, Aleksandr Riabushenko, Manuele Mori and Tom Bohli to propel him to another positive result.