Mertens joins Maradona as Napoli close in on CL berth 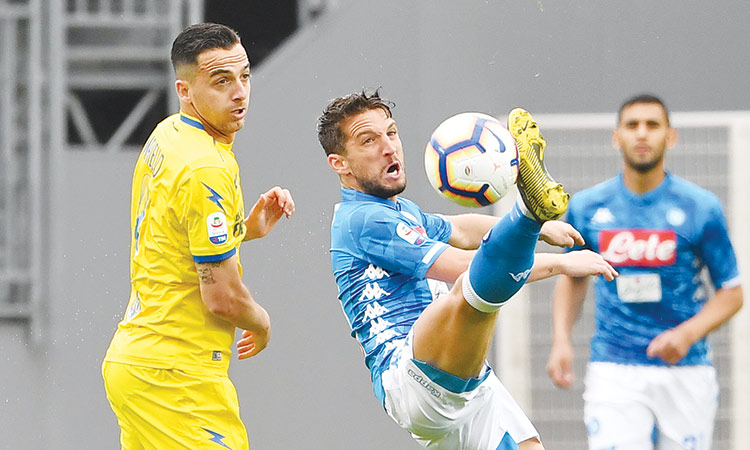 Napoli’s Dries Mertens (centre) vies for the ball with a Frosinone player during their Italian League match on Sunday. Agence France-Presse

Dries Mertens moved level with Diego Maradona in Napoli’s Serie A scoring list as he helped them take a big step towards securing Champions League football for next season with a comfortable 2-0 Serie A win at Frosinone on Sunday.

Carlo Ancelotti’s side are almost unreachable on 70 points in second place thanks to Mertens’ smart 19th-minute free-kick -- which made the Belgian Napoli’s joint third-highest Serie A scorer with 81 goals -- and Amin Younes’ simple finish three minutes after the break. The result also all-but condemned Frosinone to relegation.

“Congratulations to him for joining Maradona, he deserves it for what he does,” Ancelotti said of Mertens.

“He always looks in form to me, even when he’s playing badly. He gives everything, works hard for the team, and I like the way he conducts himself, even when he’s angry and not playing.”

With four matches remaining Napoli are eight points clear of third-placed Inter Milan, who drew 1-1 with newly-crowned champions Juventus on Saturday, and a full 14 ahead of AC Milan and Atalanta, who sit just outside the Champions League places both on 56 points.

The pair are in action later on Sunday and have a chance to move a point ahead of Roma, who despite a wildly inconsistent season occupy the final Champions League spot following Saturday’s comfortable 3-0 home win over Cagliari.

Roma’s interim coach Claudio Ranieri said that he would be “super happy” for Antonio Conte to succeed him amid speculation the club have lined up a three-year contract worth 9.5 million euros ($10.6 million) a season to tempt the former Juventus, Chelsea and Italy manager to the Italian capital.

Napoli, who are 18 points behind Juve and were knocked out by Arsenal in the Europa League quarter-finals, will be certain of Champions League football next season if both Milan and Atalanta fail to win.

Napoli’s recent form has been spotty with only two wins in their last five league matches.

Frosinone, on the other hand, need Udinese to lose away to Atalanta on Monday. Victories for the 17th-placed side and for Genoa against SPAL would confirm relegation to Serie B.

Frosinone are 10 points behind Udinese and a further point away from Genoa, who take on a SPAL team who have almost secured safety after winning five of their last six matches.