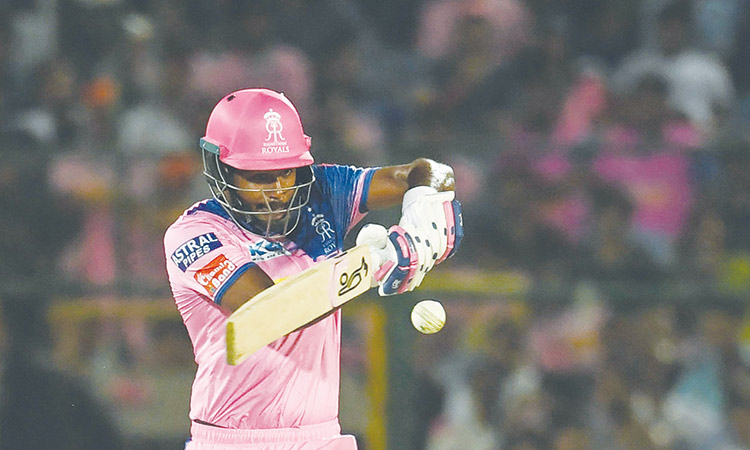 Rajasthan Royals’ (RR) chances of making it to the playoffs received a big boost when they registered a comprehensive seven-wicket win over over Sunrisers Hyderabad (SRH) in an Indian Premier League (IPL) tie at the Sawai Mansingh Stadium in Jaipur on Saturday.

The Rajasthan opening pair of Ajinkya Rahane and Liam Livingstone began their chase in belligerent fashion, putting up a 78-run stand in 9.1 overs before Livingstone (44 off 26 balls, 4x4, 3x6) became the first one to depart, caught behind off the bowling of Afghanistan spinner Rashid Khan.

The Royals were to lose their second wicket not much later when Rahane (39 off 34, 4x4, 1x6) was caught by David Warner off the bowling of Shakib Al Hasan in the 12th over when Rajasthan had reached a score of 93.

Skipper Smith was the next to go, his wicket claimed by speedster Khaleel Ahmed who had him caught by Siddarth Kaul for 22 off 16 balls (3 fours).

Earlier, some disciplined bowling by Rajasthan Royals helped them restrict Sunrisers Hyderabad at 160/8.

Despite a valiant 75-run stand between opener David Warner (37 off 32) and Manish Pandey (61 off 36), no other Hyderabad batsman could rise to the occasion as Rajasthan bowlers jolted visitors at regular intervals after the duo’s departure.

Put to bat, Hyderabad openers Kane Williamson (13 off 14) and Warner started cautiously adding 27 runs in the initial three overs. Two runs later, Gopal came with the first blow as he clean bowled Williamson in the fourth over.

The Hyderabad skipper’s fall saw Manish joining hands with Warner in the middle and the duo perfectly repaired the early damage, steering their side to 50-run mark in 5.5 overs. Both the batters continued to attack hosts’ bowlers and kept the scoreboard ticking as visitors touched the three-digit mark in 11.3 overs.

Thomas came with a much needed breakthrough in the 13th over as he packed back a good-looking Warner, leaving Hyderabad at 103/2. Warner’s fall saw the visiting team’s middle-order collapse and they lost five wickets with the addition of just 34 runs in quick succession.

After Warner, Manish also departed soon and Vijay Shankar (8), Shakib Al Hasan (9), Deepak Hooda (0) and Wriddhiman Saha (5) failed to click, leaving Hyderabad at 137/7. Unbeaten Rashid Khan chipped in with 17 runs off eight balls down the order, one four and one six, as visitors reached a respectable total.

Meanwhile, the Indian Supreme Court-appointed Committee of Administrators (CoA) on Saturday decided that the playoffs of the 12th edition of Indian Premier League (IPL) will start from 6.30pm (UAE time) instead of the scheduled 6.30pm start.

The 11th edition of the cash-rich league had seen the playoff games beginning at 5.30pm.

Speaking to IANS, a BCCI executive said that dew will be an important factor down south while the host broadcasters, Star Sports, had already requested for an early start as the playoffs will be followed by an elaborate presentation ceremony.

“We have the playoffs in the south where dew is a huge factor. Also, Star had written to us to prepone the timings. If you realise, there is the case of an extended presentation ceremony after the playoffs. Keeping all this in mind, it was felt that we should bring it forward,” the official said.