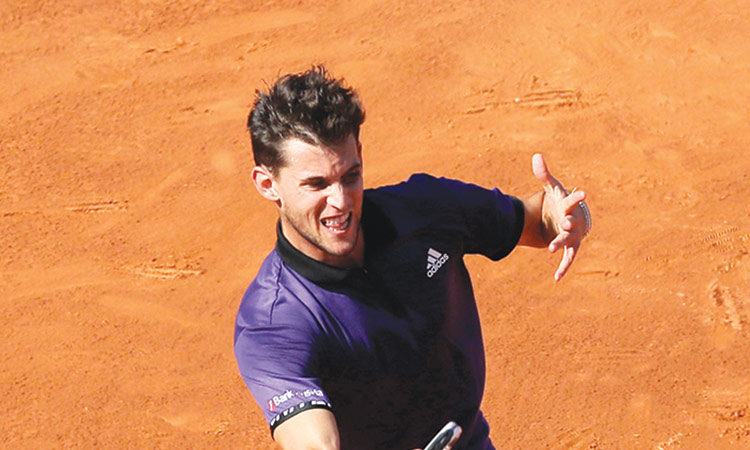 Dominic Thiem knocked favourite and 11-times champion Rafael Nadal out of the Barcelona Open with a stunning 6-4 6-4 victory in Saturday’s semi-final, avenging his defeat by the Spaniard in last year’s French Open final.

The Austrian will meet 23-year-old Daniil Medvedev in Sunday’s final after the Russian also pulled off a surprise by edging out fourth seed Kei Nishikori 6-4 3-6 7-5 in a tight match.

Thiem had lost his last two matches against world number two Nadal, at Roland Garros as well as a thrilling five-setter in the U.S. Open quarter-finals, but he won their last meeting on Spanish soil, beating the Mallorcan in last year’s Madrid Open.

The Austrian, ranked fifth in the world, broke Nadal to take a 3-2 lead in the opener and held in the next game thanks to a stunning crosscourt forehand winner before seeing out the set.

He broke Nadal again in the fifth game to lead 3-2 and edged towards victory by taking a 30-15 lead before Nadal pulled himself back into contention by winning the next three points.

Thiem was serving for the match but Nadal dug deep to earn three break points only to lose each one, Thiem levelling the game with an ace after a marginal call from the umpire.

He sealed his fourth career victory over Nadal in 12 matches with a softly-struck backhand which the Spaniard had no chance of reaching, ending Nadal’s chances of a fourth consecutive Barcelona Open title.

Earlier, Japan’s Kei Nishikori missed his chance to reach another final at the Barcelona Open as he lost 6-4, 3-6, 7-5 Saturday to Daniil Medvedev.

Fourth seed Nishikori had reached the final of the Catalan clay-court event three times, winning in 2014 and 2015 but losing the 2016 final to Rafael Nadal.

Asia’s top player won’t get the chance for revenge this year. The players exchanged breaks in the third set before the seventh seeded Russian Medvedev seized the first match point to break in the 12th game.

Meanwhile, world number one Naomi Osaka joked that she had jinxed herself after pulling out of the WTA tournament in Stuttgart due to an abdominal injury on Saturday, but hopes to return to action in time for the French Open.

The 21-year-old Japanese was scheduled to play a semi-final against Estonian eighth seed Anett Kontaveit, but announced in the afternoon that she would be unable to play.

Yet the world number one said she was confident that she would return to fitness in time to play at Roland Garros at the end of next month where she will be bidding for a third successive Grand Slam title.

“Even though it is bad that I got injured here, I am happy that it happened at the beginning of the clay season, and not in Rome where it is really close to the French Open.”

Osaka said that she had to roll out of bed on Saturday morning after picking up the injury during her quarter-final win over Donna Vekic on Friday.

“I couldn’t lift my upper body. I don’t expect that I will be able to serve,” she said.

The Czech is in the final for the first time in Stuttgart, having twice been knocked out in the last four in past years.

“It won’t be easy against Anett. We practised a bit together before the tournament, which was fun,” said Kvitova.