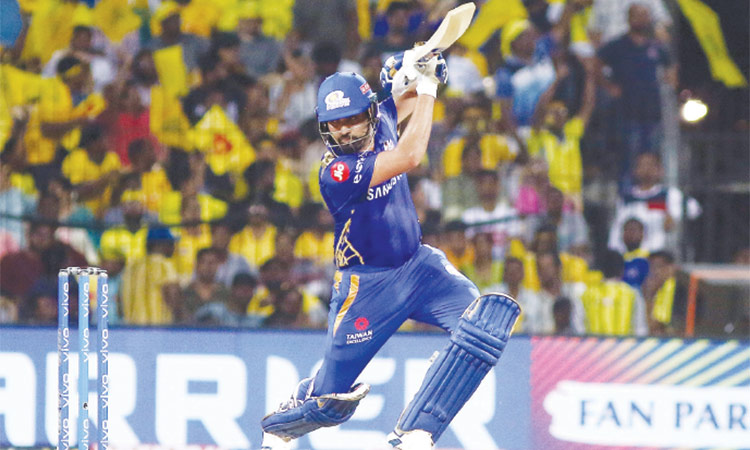 A captain’s 48-ball 67-run knock (6x4, 3x6) by Rohit Sharma and a fine bowling performance by the bowlers helped Mumbai Indians (MI) get the better of table-toppers Chennai Super Kings (CSK) by 46 runs in an Indian Premier League (IPL) match at the MA Chidambaram Stadium in Chennai on Friday.

With this win, Mumbai climbed to second spot on the IPL table with 16 points, above Delhi Capitals on the basis of their better net run rate. CSK’s first loss at the Chepauk since May 2015 meant that they have to wait till they are sure of a place in the play-offs.

Lasith Malinga was Mumbai’s most successful bowler with figures of 4/37 off 3.4 overs.

Among Chennai’s top and middle order, only opener Murali Vijay offered some resistance, scoring 38 (35 balls, 3x4, 1x6). First to go was Shane Watson who was caught by Rahul Chahar off the bowling of Malinga for 8 when CSK had just 9 on the board. 14 runs later, captain Suresh Raina followed Watson back to the dug-out, when Hardik Pandya had him caught by Suryakumar Yadav for just 2.

Wicketkeeper batsman Rayadu was next clean-bowled by Krunal Pandya for nought after 12 runs had been added to the CSK score. Kedar Jadhav was then bowled by Krunal for 6 before Dhruv Shorey (5) departed when he was caught by Chahar off Anukul Roy’s bowling.  Mumbai more or less wrapped up the match when their sixth wicket -- that of Vijay -- fell, caught by Yadav off Jasprit Bumrah’s bowling for 38. Chennai’s score at this stage in 11.4 overs, was 66 runs.

At CSK’s score of 99, Dwayne Bravo became Malinga’s second victim, caught and bowled for 20 (17 balls). Two runs later, Deepak Chahar was Bumrah’s second wicket when he had him caught by Krunal for naught.

Harbhajan Singh (1) did not last long, caught by Hardik to become Malinga’s third victim before the Sri Lankan quick came back to claim his fourth in the form of Mitchell Santner, caught by Pollard for 22 (20 balls).

Earlier, some disciplined bowling by CSK restricted Mumbai to a modest 155/4 as Rohit contributed with a 48-ball 67. Rohit and Evin Lewis (32 off 30) were involved in a 75-run partnership for the second wicket and at one stage it looked as if the visitors will reach a massive total. However, after the fall of Lewis, the Chennai bowlers bowled economically and picked up wickets at regular intervals to deny Mumbai a big total.

For Chennai, Santner was the pick of the bowlers as he impressed with figures of 2/13 from his four overs while Chahar, who was the only Chennai bowler to leak runs, and Imran Tahir picked a wicket each.

Put into bat, Chahar came up with an early breakthrough as he packed back an in-form Quinton de Kock (15) with Mumbai at 24 runs in 2.4 overs. While trying to go for the maximum, de Kock misread Deepak’s slower delivery and a top-edge off his bat went up in the air and Ambati Rayudu took the catch with ease.

Lewis and Rohit then tried to repair the damage and took their side past the 50-run mark in 6.5 overs. They then steadily propelled Mumbai near the three-digit mark before Santner dismissed Lewis with Mumbai’s scorecard reading 99/2.

After the addition of 21 runs in the visitor’s score, Santner struck again to pick up the crucial wicket of a well-settled Rohit in the 17th over. Hardik Pandya (23 unbeaten off 18) and Keiron Pollard (13 unbeaten off 12) then added 33 runs in the remaining 22 balls as Mumbai reached a fighting total.

After beating Kolkata Knight Riders (KKR) in their own backyard, Rajasthan Royals (RR) will return home to keep their chances afloat of making it to the playoffs of the ongoing Indian Premier League (IPL) edition when they take on Sunrisers Hyderabad (SRH) at the Sawai Mansingh Stadium in Jaipur on Saturday.

Royals would be missing the likes of Ben Stokes and Jofra Archer who have flown back to England to join their World Cup camp.

On the other hand, SRH would dearly miss Jonny Bairstow who has done the bulk of their scoring alongside David Warner. It is expected that New Zealand’s Martin Guptill will be included in the playing XI. They would also be hoping for the return of their regular skipper Kane Williamson, who was missed in their last game.