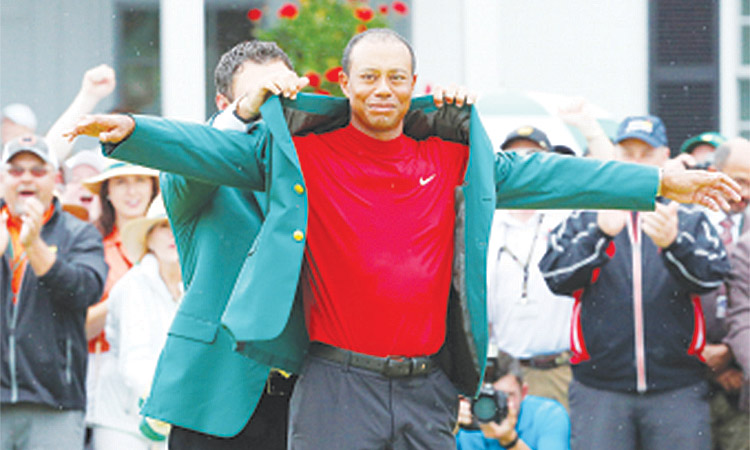 Patrick Reed places the green jacket on Tiger Woods after the latter won the 2019 Masters in Augusta on April 14. File / Reuters

Tiger Woods believes he can still catch up to Jack Nicklaus and his record of 18 major titles after ending a decade-long drought with a win for the ages at Augusta National.

The 43-year-old stunned the sporting world earlier this month by completing an epic comeback from spinal fusion surgery to capture his 15th major and his first since the 2008 US Open.

A 2009 sex scandal followed by knee and back injuries that required seven operations had led to a prolonged wait to add another major title to his honours.

But his fairytale fifth green jacket has put Woods firmly back in pursuit of the all-time record of 18 major wins by Nicklaus.

“I always thought it was possible, if I had everything go my way,” Woods said in an interview with streaming service GOLFTV.

“It took him an entire career to get to 18, so now that I’ve had another extension to my career -- one that I didn’t think I had a couple of years ago -- if I do things correctly and everything falls my way, yeah, it’s a possibility.

“I’m never going to say it’s not. Except for a couple of years ago when I couldn’t walk.

“Now I just need to have a lot of things go my way, and who’s to say that it will or will not happen? That’s what the future holds, I don’t know. The only thing I can promise you is this: that I will be prepared.”

Woods prevailed by one stroke on a dramatic final day at Augusta, remarkably his first major victory in which he did not lead after 54 holes.

A double-bogey by leader and British Open champion Francesco Molinari at the 12th gave Woods an opening to erase a two-shot deficit. The American birdied three of the next four holes to surge clear from a pack of contenders.

“It went from a one-horse race with all of us kind of chasing Francesco, to now Pandora’s box is now opened up playing 13, where right now there’s at least seven with a legitimate chance to win the tournament with six holes to go,” Woods recalled.

Asked whether his achievement had sunk in, he replied: “No, honestly it hasn’t. It’s hard to believe.

“Every now and again, I’ll look over there on the couch and there’s the jacket. Yeah, I did pull it off.”

It was the first time daughter Sam Alexis, 11, and son Charlie, 10, had seen their famous father win a major title except in videos.

“They never knew golf to be a good thing in my life and only the only thing they remember is that it brought this incredible amount of pain to their dad,” said Woods.

“And so to now have them see this side of it, the side that I’ve experienced for so many years of my life, but I had a battle to get back to this point, and it feels good.”

Woods is expected to return to action at the May 2-5 Wells Fargo Championship in North Carolina, two weeks ahead of the PGA Championship at Bethpage Black.

Elsewhere in Los Angeles, Stacy Lewis fired a six-under 65 on Thursday for a share of the lead with Hannah Green after the first round of the USLPGA Tour’s Los Angeles Open on Thursday.

The 34-year-old American birdied four of her last six holes in the bogey-free round at Wilshire Country Club.

Lewis didn’t like the course setup last year but says organizers have made some improvements.

Green also had a bogey-free round.

Her Australian compatriot Lee Min-jee Lee also went bogey free and was a stroke back.

Canada’s Anne-Catherine Tanguay was just two strokes back of the leaders after shooting a four-under 67.