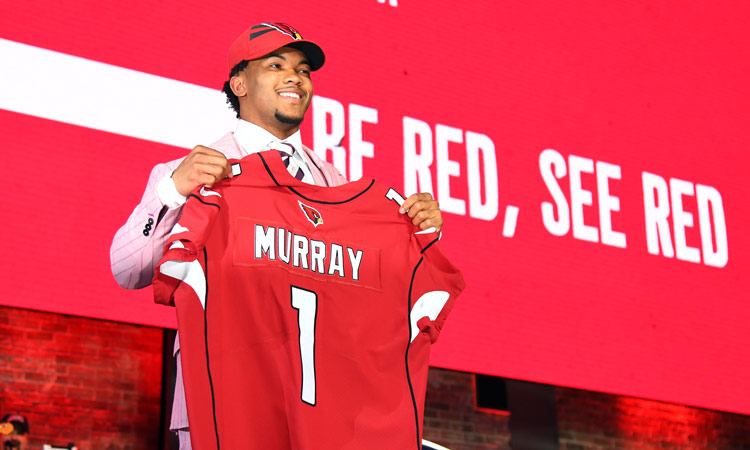 Kyler Murray is selected as the number one overall pick to the Arizona Cardinals in the first round of the 2019 NFL Draft in Downtown Nashville. Reuters

The Arizona Cardinals made reigning Heisman Trophy winner Kyler Murray the number one selection in the 2019 National Football League entry draft on Friday.

Murray became the first player in history to be a first-round pick in both the Major League Baseball and NFL drafts, after the Oakland Athletics picked him ninth overall in 2018.

He agreed to pay back his $4.7 million signing bonus to the A’s when announcing in February that he would be committed to football full-time moving forward.

“It has been a dream of mine since I was a kid,” said Murray of being drafted to the NFL. “To everyone in my corner that has pushed me, I can’t thank them enough.

“I can’t wait to get out there. It has been a long time coming.”

The Cardinals are hoping that Murray could start immediately but complicating matters is that the Cardinals 2018 first round pick was also a quarterback, Josh Rosen.

Now that Arizona has officially landed Murray, some believe that Rosen, their starting quarterback in 2018, is on the trading block.

Murray, a versatile player who passed for 42 touchdowns and ran for 12 more last season, leads a 2019 rookie class that is deep in talent. He also threw seven interceptions.

There is some concern about Murray’s height because at five-foot-10, he is considered small by today’s quarterback standards.

But Russell Wilson of the Seattle Seahawks and Doug Flutie, who starred for two decades in the NFL and CFL, are both under six feet and their height was never a liability.

Bosa is following in the footsteps of his father John and brother Joey, who were also previous first-round draft picks.

Bosa wound up going one pick higher than his brother, Joey, whom the San Diego Chargers took third overall in 2016.

While quarterbacks generally get all the attention at the draft, Williams is part of a strong defensive corps of players that is expected to define this year’s draft.