Osaka even with Hsieh in Stuttgart; Nadal through in Barcelona - GulfToday

Osaka even with Hsieh in Stuttgart; Nadal through in Barcelona 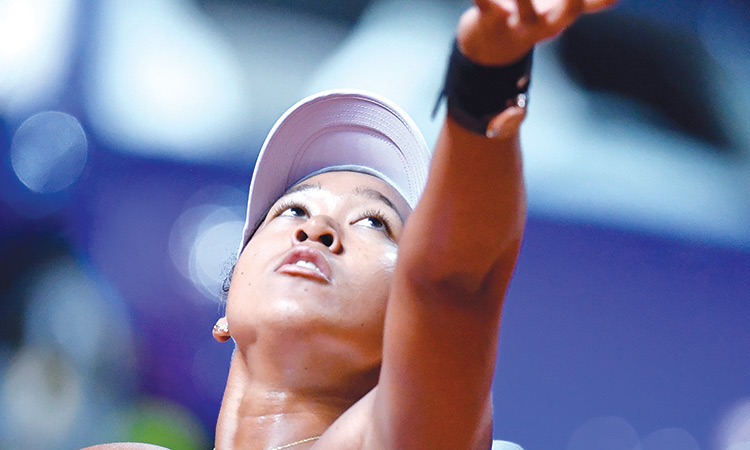 Naomi Osaka serves to Su-Wei Hsieh during their round-of-16 match in Stuttgart on Thursday. Agence France-Presse

World number one Naomi Osaka defeated Hsieh Su-wei 6-4, 6-3 in her first clay court match of the season in Stuttgart on Thursday.

US and Australian Open champion Osaka, who lost to Taiwanese veteran Hsieh in Miami last month, secured a place in the quarter-finals against Croatia’s Donna Vekic.

Osaka, 21, broke Hsieh three times in total to beat Hsieh for the second time in three attempts this year, having also defeated her on the way to lifting the title in Melbourne.

“She’s a really tricky opponent. You never really know what she’s going to do,” said Osaka.

Osaka needed 84 minutes to dispatch the unconventional Hsieh, a win that ensures she will hold on to top spot for at least another week.

She is less than 200 points ahead of Simona Halep in the WTA rankings, although the Romanian pulled out of this week’s tournament with a hip injury.

Top seed Osaka fought off the only two break points she faced, in a lengthy service hold for 2-all in the opening set, before breaking Hsieh in the following game.

That was sufficient to wrap up the first set, and a Hsieh double-fault handed Osaka a break to start the second before she closed out victory with another service break in a performance that featured 22 winners and just 16 unforced errors.

The Japanese star arrived in Stuttgart, where she last played in Stuttgart as a qualifier in 2017, after suffering early exits in her last three tournaments.

“Definitely I’ve put a lot on pressure on myself and found it hard to deal with in the first few tournaments,” said Osaka. “I’m really having fun now though.”

Bertens, the number seven in the world, had her serve clicking against Bencic. She had no less than twenty aces, a personal record, against the Swiss who is thirteen places lower in the world ranking.

Meanwhile, Rafael Nadal showed no mercy towards an emotional David Ferrer as he eased into the quarter-finals of the Barcelona Open on Thursday with a straight-sets victory.

Ferrer is set to retire after the Madrid Open next month and made a tearful exit on what was his last appearance at this tournament.

But there was no room for sentiment for Nadal, who won 6-3, 6-3 to take one step closer to a record 12th Barcelona title.

Third seed and 2017 finalist, Dominic Thiem, was impressive in a 7-5, 6-1 victory over Spaniard Jaume Munar in cold and overcast conditions on Thursday at the Barcelona Open Banc Sabadell.

He will next face France’s Benoit Paire, the recent Grand Prix Hassan II champion (d. Andujar) or Argentina’s Guido Pella, the Brasil Open titlist (d. Garin) in February. Kei Nishikori meanwhile, swept into the quarter-finals with a 6-1 6-3 win over Felix Auger-Aliassime on Thursday.

The seventh-ranked Japanese star, eliminated in the second round in Monte Carlo last week, broke the Canadian teenager, ranked 31st, in the opening game of the match. Nishikori then broke again in the fifth and seventh games to take the set.

After Nishikori broke in the fourth game of the second set, Auger-Aliassime began to fight back. The 18-year-old had five break points in the next game, before the fourth seed held.

The Canadian finally broke, to love, in the seventh game but Nishikori broke straight back and served out to win the match. In the other early match, seventh seeded Russian Daniil Medvedev beat American Mackenzie McDonald 6-3, 6-2.