Despite Karthik’s 97 for KKR, Parag wins it for Royals - GulfToday

Despite Karthik’s 97 for KKR, Parag wins it for Royals 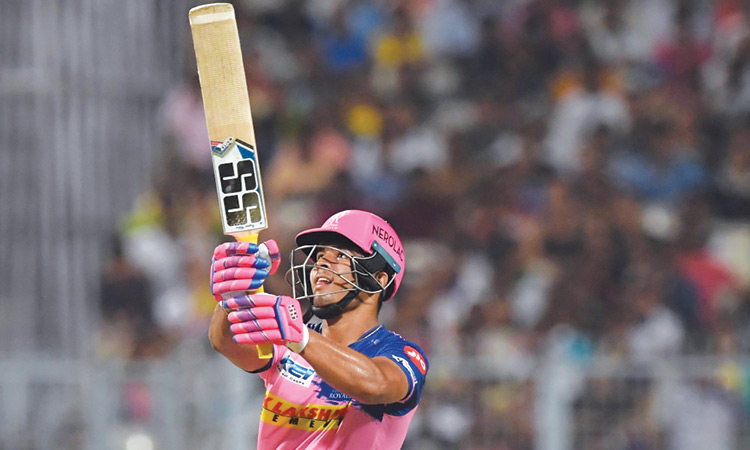 Rajasthan Royals’ Riyan Parag in action against the Kolkata Knight Riders during their IPL match at the Eden Gardens on Thursday. Agence France-Presse

A dropped catch by Sunil Narine proved costly as Rajasthan Royals’ (RR) Riyan Parag went on to hit a 31-ball 47 (5x4, 2x6) and take his team to a 3-wicket win over Kolkata Knight Riders (KKR) in their IPL match at Kolkata’s Eden Gardens on Thursday.

This despite a sterling skipper’s unbeaten 50-ball 97-run knock (7x4, 9x6) by Dinesh Karthik, followed by a 3/20 spell by leg-break bowler Piyush Chawla, both of which went in vain for the hosts.

In reply to Kolkata’s competitive score, Rajasthan’s openers, Ajinkya Rahane and Sanju Samson put up a breezy 53 runs by the fifth over. However in the very next over, a fuller length ball from Sunil Narine caused Rahane to miss the line and end up leg before wicket. Rahane’s 34 came in 21 balls (5x4, 1x6).

Samson was joined by captain Steven Smith at the fall of Rahane’s wicket. However in overs 7, 8 and 11, the Royals were to be lose three more quick wickets. First to go was Samson who was cleaned up by Chawla for a 15-ball 22 (2x6) and he was then followed into the pavilion by Smith who was clean bowled by Narine for 2. Next to go was Stokes who became Chawla’s second victim when the bowler had him miscuing a googly, to be caught by Andre Russel on the ropes when he was on only 11 and the side on 78. Chawla in his fourth over then enticed Stuart Binny to go for a slog sweep, only to hole out to Rinku Singh at mid-wicket for 11. The Royals at the fall of their fifth wicket had 98 in 12.3 overs.

Shreyas Gopal was next to go in the 16th over, caught by Shubman Gill off the bowling of medium pacer Prasidh Krishna for 18, at Rajasthan’s score of 123.

Riyan Parag, who earlier got a life when when Narine dropped a dolly, was finally out hit wicket by Andre Russell for a well-struck 31 ball-47 (5x4, 2x6) but not before turning the game in favour of the Royals.

Jofra Archer struck the final blows, a four followed by a six off Prasidh to take Rajasthan to a 3-wicket win.

Earlier, under-fire skipper Karthik silenced his critics with a career-best 97 not out as KKR recovered from an atrocious start to post a competitive 175 for six against Rajasthan Royals in their must-win IPL fixture in Kolkata on Thursday.

The World Cup-bound Karthik promoted himself to No.4 and smashed nine sixes and seven fours in his 50-ball unbeaten knock, as KKR hit top gear in the back end of the innings, scoring 126 from the last 10 overs and 75 off the last five overs. Russell looked lacklustre in his run-a-ball 14.

Karthik in the 11th over hit Shreyas Gopal for a six followed by three fours in an over that yielded 25 runs and then went on to complete his fifty from 35 balls, smashing Jofra Archer for successive sixes in the penultimate over before bettering his previous best of 86 when he went berserk against Unadkat by hitting him for two sixes and one four in the final over.

Unadkat conceded 50 runs for his one wicket and was the most expensive of the lot as he undid all the good work done by Varun Aaron (2/20) who had a fine new ball spell of 3-1-10-2.

Put in to bat, KKR got off to an atrocious start to be 32/2 in powerplay overs against an all out pace attack from Rajasthan Royals.

Playing his only second match this season, Aaron extracted pace and swing from the fast-paced Eden track and removed both the openers Chris Lynn (0) and Shubman Gill (14) cheaply.

Aaron set up Lynn brilliantly with his first two balls before bowling a delivery that sharply came back as the Australian played it on to his stumps in a wicket-maiden first over.

Then the talented Gill had no answer to negotiate an inswinger as he was completely beaten by pace to see the ball clip his bails.

Archer capped a superb powerplay for Royals with another maiden as the dispirited KKR found themselves going nowhere and seemed to be losing the plot before skipper Karthik revived them at the back end of the innings.