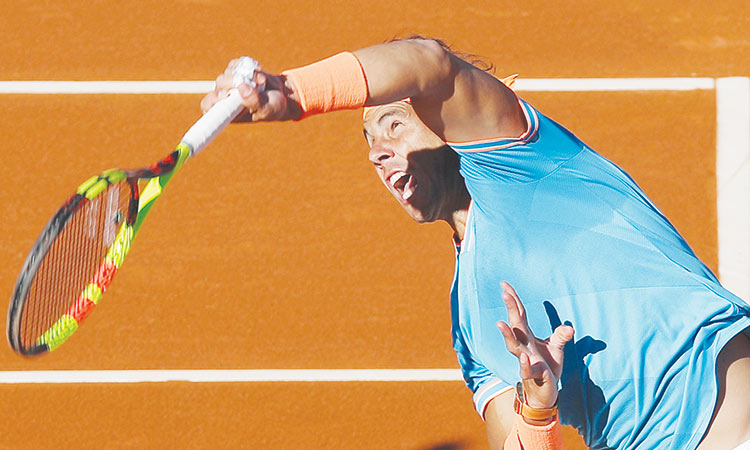 Rafael Nadal during his match against Leonardo Mayer at the Barcelona Open Tennis Tournament on Wednesday. Associated Press

Rafael Nadal survived an early scare at the Barcelona Open on Wednesday by coming from a set down to beat Argentina’s Leonardo Mayer and seal his place in the last 16.

Nadal, who is attempting to win the tournament for a record 12th time, was made to work hard for his 6-7 (7/9), 6-4, 6-2 victory as the world number two avoided a surprise defeat ahead of the start of the French Open next month.

Fellow Spaniard David Ferrer now awaits Nadal in the next round, with a place in the quarter-finals at stake. Nadal has won all of his last four meetings with Ferrer.

Alexander Zverev, meanwhile, has admitted he is at a loss to explain his dip in form after the world number three was beaten by lucky loser Nicolas Jarry in the second round of the Barcelona Open on Tuesday.

The German had taken a late wildcard in Barcelona in search of both matches and form after a string of surprise defeats.

Jarry had even lost in qualifying to Spain’s Marcel Granollers but, after being given a reprieve, knocked out the same opponent in the first round to set up a meeting with Zverev, long-considered a future star of the men’s game.

The Chilean upset both Marin Cilic in Shanghai and Dominic Thiem in Hamburg last year but this was the biggest victory of his career and another setback for Zverev, with just over a month to go before the start of the French Open.

World number one Naomi Osaka will have a chance for revenge on Taiwan’s Hsieh Su-wei this week when the two meet in the second round of the WTA tournament in Stuttgart.

Hsieh came from behind to beat China’s Wang Qiang in three sets 4-6, 6-3, 6-4 on Wednesday to set up a second round clash with Osaka, whom she beat in Miami last month.

Osaka beat Hsieh on the way to her Australian Open triumph in January, but the experienced Taiwanese caused an upset in March when she inflicted an early exit on the Japanese star at the Miami Open.

The two players are now set to lock horns again, with their second round clash scheduled for Thursday.

Meanwhile, Angelique Kerber will face compatriot Andrea Petkovic in the second round of this week’s WTA tournament in Stuttgart, after Petkovic beat Spain’s Sara Sorribes Tormo in straight sets on Tuesday.

In the other ties Belgium’s Greet Minnens stunned Slovakian Dominika Cibulkova, ranked 159 places above her, to set up a second round meeting with world number three Petra Kvitova.

Laura Siegemund became the third German to reach the second round when she beat Ukrainian Lesia Tsurenko, while Anna-Lena Friedsam went down fighting in two sets against Dutch sixth seed Kiki Bertens.

Earlier in the day, Elise Mertens of Belgium was knocked out by Russia’s Darya Kasatkina, and Anastasika Sevastova overcame fellow Latvian Jelena Ostapenko in a rollercoaster battle over three sets.

The ATP Finals, the annual event bringing together the top eight men’s players in the world, will take place in Turin, Italy, from 2021 to 2025, the ATP said on Wednesday.

The elite showdown which closes the men’s tennis season has been held in London since 2009.

“The five-year agreement will see the world’s greatest players in men’s professional tennis compete for the biggest indoor tennis title in the world at Turin’s Pala Alpitour stadium, Italy’s largest indoor sporting arena,” the ATP said in a statement.

Turin will be the 15th venue and the first in Italy to host the event introduced in 1970 as the biggest men’s tennis tournament of the season after the four grand slams.