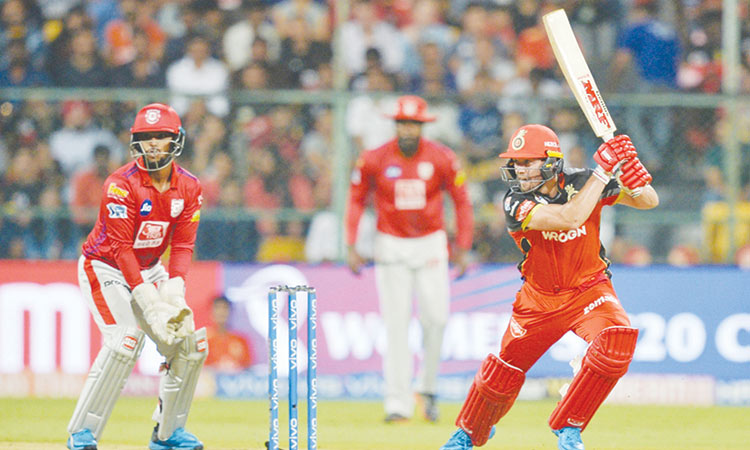 Powered by an unbeaten 82 off only 44 balls by the ever-dependable AB de Villiers, Royal Challengers Bangalore (RCB) beat Kings XI Punjab (KXIP) by 17 runs in a must-win IPL match for the triumphant hosts at the Chinnaswamy Stadium in Bengaluru on Wednesday.

In reply to RCB’s challenging total, KXIP’s openers got off to a rollicking start, with Chris Gayle and KL Rahul treating the RCB attack with disdain and plundering 42 in 3.1 overs. However, just after Gayle hoisted a full toss from Umesh Yadav for a six, the bowler had his revenge in the very next ball, getting the West Indian to top edge the ball to De Villiers on the fence. Gayle’s 23 off 10 balls had 4 fours and 1 six.

Next-in Mayank Agarwal joined Rahul, and the two added 59 runs for the second wicket when Marcus Stoinis forced the batsman to miscue a shot to Yuzvendra Chahal at mid-wicket. Agarwal had scored 35 off 21 balls (5x4, 1x6) and at the fall of his wicket in the first ball of the 11th over, KXIP had 101 on the board.

Four runs and exactly six balls later, KXIP suffered a jolt when in-form Rahul was foxed by Moeen Ali’s very first ball. Stepping out to loft it straight, he however miscued it off the toe-end for a simple catch to Tim Southee at long off. Rahul’s 42 came of 27 balls with 7 hits to the fence and one over it.

The two new batsmen at the crease, David Miller and wicketkeeper Nicholas Pooran had still a job do as the 203-run target suddenly appeared distant.

However, despite a tight first over from right-arm off-break bowler Washington Sundar, who gave away only 2 runs in his first over, Pooran hit him for three sixes in his next over, which went for 19 runs.

KXIP’s 150 came in 15.3 overs when Pooran hit Moeen for a six. Another six, Pooran’s fifth, brought up the 50-run partnership.

Miller then took over, hitting Southee for two fours in the next over. However, at the end of the 17th over, KXIP still needed 36 runs off 18 balls.

Yadav was brought back and a wide ball after Pooran was dropped off the 5th ball, still proved to be a tight over.

Navdeep Saini, who had given 30 runs off his first three overs, then had Miller (24 off 25) out to diving catch by De Villiers.

With Yadav accounting for Ashwin and Hardus Viljoen,  it was all over bar the shouting for Punjab.

Earlier, De Villiers’ scintillating half century and a 121-run stand with Stoinis propelled Bangalore to 202/4.

In the last two overs, both Stonis and De Villiers hammered 45 runs off Mohammad Shami and Hardus Viljoen.

After reaching his 50 off 35 balls, De Villiers, smashed Shami for three sixes, plundering 18 runs in the penultimate over.

In the last over, both Stoinis and De Villiers hammered 27 runs off Viljoen, which helped the hosts to race past the 200-run mark.

Put into bat, opener Parthiv Patel (43 off 24 balls) and Virat Kohli gave RCB a great start, getting 35 runs on board in 18 balls but Kohli was dismissed by Shami when he was caught by Mandeep Singh at extra cover.

De Villiers brought up his fifty-run stand for the fifth wicket with Stoinis with a six off Murugan.