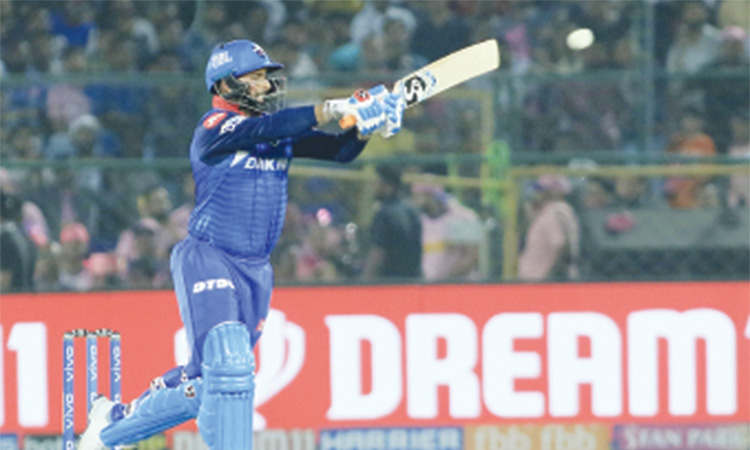 Delhi Capitals’ Rishabh Pant in action during their IPL match against Rajasthan Royals in Jaipur on Monday. Associated Press

Delhi Capitals opener Prithvi Shaw believes his team-mate Rishabh Pant is the biggest finisher in T20 cricket at the moment.

Delhi Capitals registered a convincing six-wicket win over Rajasthan Royals here on Monday night to go to the top of the points table in the ongoing Indian Premier League (IPL).

Chasing 192, Pant played a splendid knock of 78 runs off 36 balls (4x6, 6x4) and guided Delhi to its seventh victory with four balls to spare at the Sawai Man Singh Stadium.

“Rishabh Pant is the biggest finisher of the game in T20s right now, especially for our team,” said Shaw at the post-match press conference.

The right-handed batsman said his team was confident of chasing down the total.

“Definitely, there was a plan. We knew in the powerplay there will be at least one spinner bowling and Shikhar bhai was batting so well in the powerplay, he was in a good flow. Then Jofra Archer, we knew he depends more on short balls and bouncers, so we were prepared,” said Shaw.

Reflecting on his own inning, Shaw said he kept a measured approach as Dhawan was batting brilliantly at the other end.

Shaw was more measured in his approach as Dhawan (54 off 27) gave the team a magnificent start, adding 72 runs for the opening wicket with Shaw (42) in only 7.3 overs.

“I had not slowed down. It makes sense if someone is going better than you in the powerplay like Shikhi (Dhawan) bhai has done, I can’t just go out and smash every ball. I have to be mentally prepared as well to play that sort of innings.

“And that’s what happened, he and Shreyas Iyer, both were dismissed in quick succession. But I was confident that if I took the game deep, I would be able to do the job,” he added.

“There are few youngsters like me, Sandeep (Lamichhane), Manjot (Kalra) but we are never made to feel that we were inexperienced, instead we are always kept in the same group with the seniors, on and off the field.”

“Sourav sir even chills with us when we don’t have practice. We go for dinners together. So there is a very strong bonding,” he added.

Meanwhile, after propelling Delhi Capitals to their convincing win over Rajasthan Royals, Rishabh Pant admitted that the World Cup selection has been on his mind for sometime now.

Pant has not been included in the 15-member India squad for the upcoming World Cup and it is Dinesh Karthik is the second wicketkeeper who will travel with the team to England for the showpiece event.

BCCI chief selector MSK Prasad, while announcing the squad, had said Karthik was included because of his experience and superior wicket-keeping skills.

However, on Monday, Pant looked at his menacing best at the Sawai Man Singh Stadium.

“I am feeling lovely,” said Pant at the post-match presentation ceremony after being named the Player of the Match. “To make your team win in an important match is a good feeling.

“I won’t lie, the World Cup selection has been on my mind,” said Pant. “I focused on my process, I trusted my prowess and it worked for me,” he added.