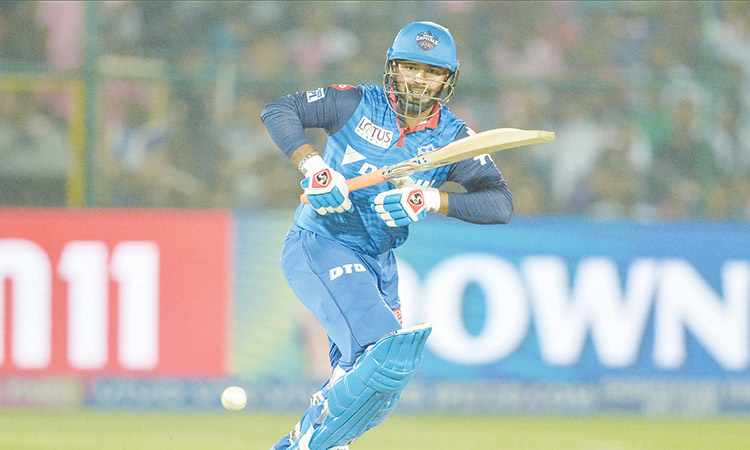 Delhi Capitals’ Rishabh Pant plays a shot against Rajasthan Royals during their IPL match at the Sawai Mansingh Stadium in Jaipur on Monday. Agence France-Presse

Rishabh Pant’s swashbuckling unbeaten knock 78 off 36 balls peppered by 6 fours and 4 sixes and a fine 54 off 27 balls by opener Shikhar Dhawan gave Delhi Capitals an easy six-wicket win over Rajasthan Royals in match 40 of the 2019 Indian Premier League (IPL) at the Sawai Mansingh Stadium in Jaipur on Monday.

A quick-fire 105 off only 63 balls (11 fours and 3 sixes) and a brisk 32-ball 50 by skipper Steve Smith which enabled Rajasthan Royals set a stiff 192-run target, all came to nought as Delhi Capitals successfully completed the chase.

Earlier, Delhi were given a decent start by their opening pair of Dhawan and Prithvi Shaw. While Shaw began circumspectly, it was Dhawan who took the bull by the horns and reached his 50 off only 25 deliveries. However, he managed to add only another boundary before leggie Shreyas Gopal had him stumped by Sanju Samson. Dhawan scored 54 off 27 balls with the help of 8 fours and 2 sixes. Next-in batsman Shreyas Iyer did not last for long and five runs after the fall of the first wicket, leg-break bowler Riyan Parag had him caught by Ben Stokes at mid-wicket for just 4. The Royals were 77 at that stage.

Pant who came in next, began aggressively and Shaw too was beginning to get into his groove.

Delhi’s wicketkeeper batsman reached his half-century in 26 balls with the help of 4 fours and 2 sixes. Gopal took his second wicket when his flighted delivery had Shaw foxed and holing out to Parag at long-on for a 39-ball 42 (4x4, 1x6). Sherfane Rutherford did not last long, claimed by Dhawal Kulkarni who had him caught by Parag in the deep for 11 runs. The Capitals lost their fourth wicket at 175.

There were no further hiccups and in the end, Pant’s brilliant 78 off 36 balls took Delhi to 193/4, thus giving them a win by 6 wickets.

Earlier, Rahane’s brilliant century (106 not out) -- two days after he was sacked as team captain -- followed by new skipper Smith’s 50, propelled Rajasthan to a fighting 191/6 against Capitals.

This was Rahane’s first IPL ton in 7 years. Put to bat, the hosts lost opener Samson (0) with just 5 runs on board. However, Rahane and Smith stitched a 130-run partnership for the second wicket. They took just 10.3 overs to help Rajasthan touch the three-digit mark. Rahane and Smith were batting at 70 and 35, respectively, at that time.

With everything going in Rajasthan’s way, it was Axar Patel who made a much needed breakthrough for Delhi by sending a well-settled Smith to the hut with Rajasthan’s score card reading 135 in the 14th over.

South African Chris Morris then cut short all-rounder and incoming batsman Ben Stokes’ stay in the middle by dismissing him in the 16th over. Stokes while trying to clear the fence handed a catch to Shreyas Iyer at long-on.

Soon after his departure, Ashton Turner (0), Stuart Binny (19) and Riyan Parag (4) also fell cheaply. But Rahane kept the scorers working and also notched up his ton to take his side to a comfortable total. Rahane’s innings was laced with 11 boundaries and three sixes. Kagiso Rabada accounted for wickets of Binny and Parag.

Meanwhile, the final of the 12th edition of the IPL will be played at the Rajiv Gandhi International Stadium in Hyderabad on May 12 after the Tamil Nadu Cricket Association (TNCA) wasn’t given permission to open stands I, J and K. Chennai will now host Qualifier 1 while Vizag will host the Eliminator and Qualifier 2.