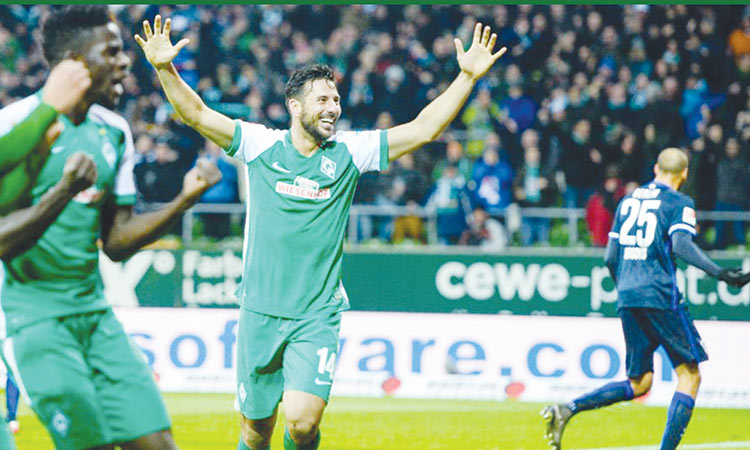 Werder Bremen’s Claudio Pizarro hopes to ruin Bayern Munich’s dreams of a domestic double when the two teams meet in the German Cup semi-final on Wednesday.

Werder Bremen’s Peruvian veteran Claudio Pizarro hopes to ruin Bayern Munich’s dreams of a domestic double when he faces his old club in the German Cup semi-final this week.

Pizarro is an icon at both Bayern and Bremen, having scored over 100 goals for each club, and is chasing a record ninth appearance in the German Cup final when the two teams meet in Bremen on Wednesday.

In a Bundesliga career spanning two decades, the 40-year-old made over 300 appearances for Bayern and is in his fourth spell at Bremen.

Bayern recently offered him a job as club ambassador after his playing career, but with a place in the German Cup final at stake on Wednesday, there is no question where Pizarro’s loyalties lie this week.

“If I come off the bench, it won’t be easy for Bayern,” said the ageing striker last week.

“I texted a few of the Bayern guys after the draw. They know it won’t be easy, and I think they would have preferred different opponent.”

The game is the second of two back-to-back clashes between the teams. Bremen showed how tough an opponent they can be in a hard-fought Bundesliga game in Munich on Saturday.

Ten-man Werder were eventually sunk by a late Niklas Suele goal, but Pizarro said that the cup tie in Bremen would be “a completely different story”.

“We will pick ourselves up. When it is 11 against 11 in our own stadium, we will show that we are able to score goals,” he said on Saturday.

Bremen will also be hoping to count on Pizarro’s German Cup pedigree on Wednesday.

The Peruvian has appeared in eight German Cup finals, more than any other player in history. He has won the competition five times with Bayern and once with Bremen in 2009.

Pizarro admitted that he is itching to experience one more final at Berlin’s Olympiastadion.

“I try to tell the players who have never played in a Berlin final how amazing it is,” he said last week.

“I tell them almost every day how special it is in Berlin, in order to prepare them for Wednesday.”

Pizarro may make a rare start for Bremen on Wednesday, after first-choice striker and captain Max Kruse picked up a knock to his thigh during Saturday’s league defeat.