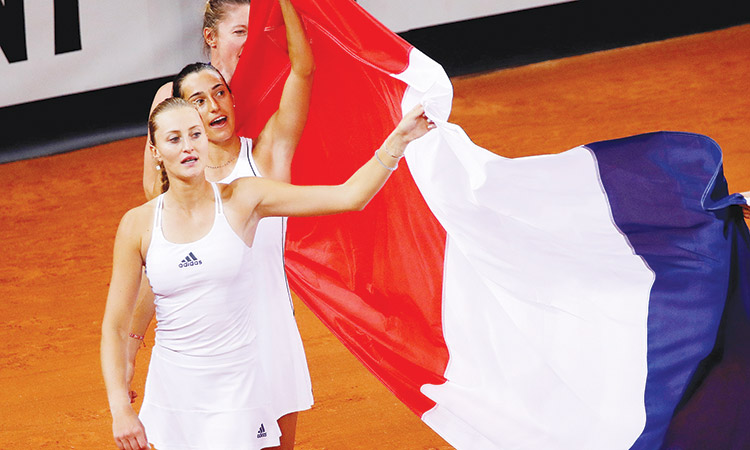 France’s Kristina Mladenovic and Caroline Garcia celebrate victory in the semi-final of the Fed Cup against Romania on Sunday. Reuters

France set up a Fed Cup final against Australia on Sunday when Caroline Garcia and Kristina Mladenovic, who once were barely on speaking terms, teamed-up to crown a 3-2 victory over Romania.

Victory was a diplomatic coup for France coach Julien Benneteau who teamed up Garcia and Mladenovic for the first time in Fed Cup since 2016 after which the pair had a bitter falling out which led to a self-imposed Fed Cup exile for Garcia, her country’s top player.

“Every match was incredible,” said Benneteau.

“I am so proud of them. It was always my intention to put them together -- and it was not hard to do.”

In a tense deciding rubber, Halep, whose doubles ranking is in the 400s, committed a double fault to concede the break in the ninth game of the final set before Garcia held her nerve to serve out the victory.

“We really made the effort from start to finish together, it was intense on the court from the first point of the weekend to the last. But it was a great weekend and we can really be proud.”

France, who won the last of their two titles in 2003, will travel to Australia for the final.

Six-time champions Australia, whose most recent title was in 1974, reached a first final in 26 years by seeing off Belarus 3-2 in Brisbane in a tie also settled by a three-set deciding doubles rubber.

Halep gave Romania a lead on Saturday by seeing off Mladenovic 6-3, 6-1 before Garcia swept past Mihaela Buzarnescu 6-3, 6-3 to level the tie.

“I knew it would be more difficult than yesterday,” said Halep after registering a ninth successive singles win in a tournament that Romania have yet to win.

“It felt like playing at home, that was how I was able to fight to the end. I won it for the fans who came here.”

Halep’s win over Garcia, her sixth in seven meetings, took almost three hours with the crucial break in the final set coming in the eighth game when the French number one served up back-to-back double faults.

Australia made the championship match when Ashleigh Barty and Samantha Stosur battled past Victoria Azarenka and Aryna Sabalenka 7-5, 3-6, 6-2.

The tie was sent into the crucial doubles match after two-time Australian Open champion Azarenka crushed Stosur 6-1, 6-1 in the reverse singles, after Barty swept past Sabalenka 6-2, 6-2.

“I could not have picked two more perfect athletes to compete. Ash and Sam are superstars,” said captain Alicia Molik who will look to inspire a first title since 1974 for Australia in the final.

Barty called making the final “unbelievable” while Stosur said it was “super exciting”.

“We knew it was going to be a tough one and we just so happy with how we played,” added Stosur. “All the girls have worked so hard throughout the year and we really stick together.”

Meanwhile, Novak Djokovic stretched his lead over Rafael Nadal at the top of the ATP rankings on Monday, after the Spaniard’s failed bid to win a 12th Monte Carlo Masters title.

Djokovic, winner of the last three Grand Slam tournaments, is now over 3,000 points clear of old rival Nadal despite a quarter-final defeat by Daniil Medvedev in the Principality last week.

The 31-year-old Italian reached a career-high ranking of 12th after claiming his maiden Masters trophy with a straight-sets win over unheralded Serbian Dusan Lajovic in Sunday’s final.

Fognini jumped six spots to close on the top 10, while Lajovic climbed 24 places to 24th.