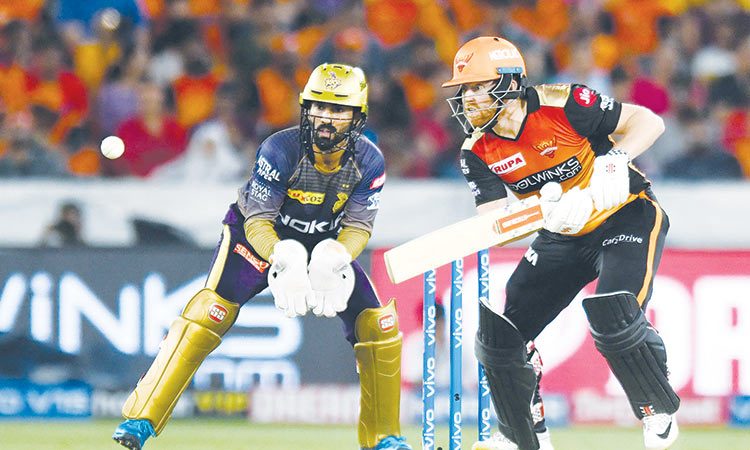 Valiant knocks by Sunrisers Hyderabad (SRH) openers David Warner (67 off 38) and Jonny Bairstow’s (80 unbeaten off 43) guided their team to a massive nine-wicket win over Kolkata Knight Riders (KKR) in an Indian Premier League (IPL) tie in Hyderabad on Sunday.

The duo forged a crucial 131-run partnership for the opening wicket to help Hyderabad run away with the contest with five overs to spare as all the Kolkata bowlers struggled to pick wickets beside leaking runs right from the start.

Hyderabad now sits at the fourth spot in the points-table, while Kolkata slipped to the sixth place following the huge defeat, also their fifth straight loss this season.

Chasing a modest 160-run target, Warner and Bairstow dominated right from the word go. As the openers started hammering Kolkata bowlers, Hyderabad was comfortably placed at 32/0 in the first three overs before they crossed the 50-run mark in just 4.3 overs.

The openers steered thier side past the three-digit mark in 8.4 overs. Warner and Bairstow also notched up their respective half-centuries in the next over. The duo kept on clobbering KKR bowlers all around the park and hammered Sunil Narine for 16 runs in the 12th over with Hyderabad just 30-runs away from victory.

The lone wicket of the Orange Army fell in the 13th over when Warner became victim of Yarra Prithviraj. The Australian’s innings was laced with three boundaries and five hits into the stands.

Despite Warner’s dismissal, there was no stopping for Bairstow who seemed in a hurry to finish things off. Bairstow kept the scoreboard ticking with incoming batsman Kane Williamson (8 unbeaten off 9) before slamming Piyush Chawla for 19 runs in the 14th over to seal a comfortable victory for Hyderabad. Bairstow’s knock contained seven fours and four sixes.

Put in to bat, KKR had a brisk start with openers Narine and Chris Lynn scoring 42 runs in just 2.4 overs before the West Indian fell prey to Khaleel. After collecting 14 runs off the first three deliveries of Khaleel, Narine missed the slower ball and got bowled at 25 (8 balls, 4x3, 6x2).

Shubhman Gill who came in to bat at number three couldn’t stay longer at the crease and became the second victim of Khaleel. Gill scored just three runs of four deliveries.

Nitish Rana (11), coming after Gill’s dismissal, battled sensibly alongside Lynn and the duo took the score to 61-2 at the end of the powerplay. But his stay at the wicket was ended by Bhuvneshwar Kumar by getting him caught behind with a spectacular delivery. Skipper Dinesh Karthik (6) yet again failed to deliver and was run out while trying to snatch a second run off Shabaz Nadeem, leaving KKR reeling at 73/4 in the ninth over.

Rinku Singh, included in the side in place of Robin Uthappa, stitched a good partnership with the Australian and both took the score to 116/4 after 15 overs. But while trying to accelerate scoring and go for big hits, Singh (30) got out after Rashid Khan took a good, sliding catch at the mid-wicket boundary with the team score being 124.

Chasing a moderate total CSK manage to reach 160 for the loss of eight wickets.

Earlier, the Chennai bowlers kept on jolting the home side at regular intervals as Bangalore failed to post a big total, thanks to Deepak Chahar, Ravindra Jadeja and Dwayne Bravo, who each picked two wickets beside bowling economically on a batting friendly Chinnaswamy track.