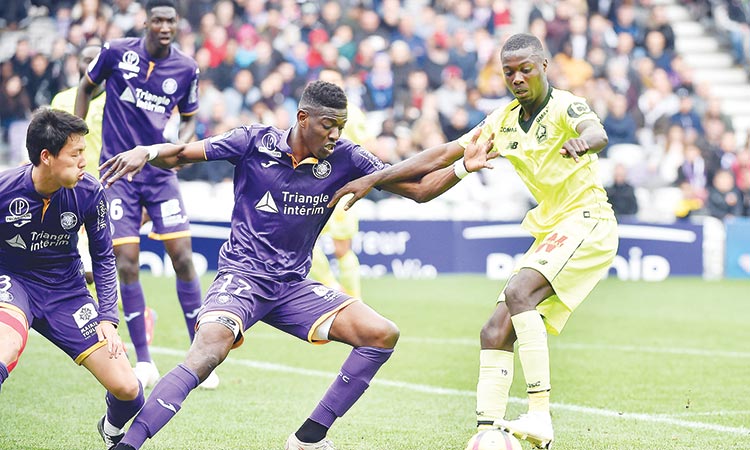 Toulouse and Lille’s players in action during their French League match on Sunday. Agence France-Presse

Qatar-backed PSG are now 16 points ahead of Lille who have five games to play after a campaign which saw them only lose on three occasions in another dominant league campaign.

However, in a disappointing European run, Thomas Tuchel’s men failed to reach the later stages of the Champions League losing to Manchester United in the last 16.

PSG now have eight French championships since their maiden victory in 1986 although they squandered three earlier chances to secure this season’s trophy by failing to beat Strasbourg, rivals Lille and Nantes in the space of 10 days.

Tuchel, in his first year as boss, has complained about not having enough players as the world’s most expensive footballer Neymar, Argentinian Angel di Maria and defender Marquinhos have missed large parts of the season through injuries.

The German has had to call on youngsters Colin Dagba, Moussa Diaby and Christopher Nkunku to fill gaps but World Cup winner Kylian Mbappe has proved his 180 million-euro pricetag ($202 million) with 27 goals in 26 league appearances.

The Parisians host Monaco, the only other outfit two lift the trophy since 2013, later on Sunday with Neymar set to return from a foot problem which has kept him sidelined since January.

Eralier, fourth-place Marseille kept alive its chances of finishing third in the French league with a 3-1 win at struggling Guingamp on Saturday.

Marseille was without Mario Balotelli in attack but went ahead in the fourth minute through midfielder Luiz Gustavo. Winger Lucas Ocampos doubled the lead shortly before the break. Yeni Ngbakoto pulled one back for 19th-place Guingamp in the 56th before forward Valere Germain’s injury-time goal made it 3-1.

Second place earns automatic qualification for the Champions League, while third is for the qualifying rounds.

Marseille is five points behind third-place Lyon, which beat Angers 2-1 at home on Friday, and one point ahead of fifth-place Saint-Etienne, which plays on Sunday.

After this weekend, there are five rounds remaining, including Marseille at home to Lyon on May 12.

Forward Josh Maja scored his first goal for Bordeaux since joining in January from third-tier English side Sunderland , but it wasn’t enough as ninth-place Nimes rallied to win 2-1.

Striker Andy Delort netted once in each half as sixth-place Montpellier won 3-1 at Strasbourg, reaching a career-high tally of 13 league goals in the first division in the process.

Caen leapfrogged over Guingamp and moved off the bottom of the table with a 1-0 win at eighth-place Nice.

Meanwhile, Kylian Mbappe has been the standout player for Paris Saint-Germain in a Ligue 1 title-winning campaign that has been slightly marred by the manner in which they limped over the line.

The Qatari-owned club can still make it a domestic double, with the French Cup final to come against Rennes next weekend, yet this will not be remembered as a vintage year.

While Neymar once again went missing due to injury at the crucial point, Edinson Cavani has struggled with fitness too, and coach Thomas Tuchel has regularly lashed out at the lack of depth in his squad.

The 5-1 capitulation at Lille a week ago was the worst league result for PSG since Qatar Sports Investments bought the club in 2011, and the first time they had let in five in a league game since 2000.

A record-breaking 14-game winning run with which they started the season now seems like a long time ago, the latest Champions League failure clouding Tuchel’s first campaign in charge.

Mbappe, at least, has been a constant, revelling in his status as a World Cup winner and hardly ever being rested. He only turned 20 in December, but has now won three Ligue 1 titles in a row.

Mbappe has 33 goals in 39 games this season, with 27 in the league. And, frighteningly, his team-mate Daniel Alves told RMC recently that “he doesn’t realise how good he is, he can go much further.” 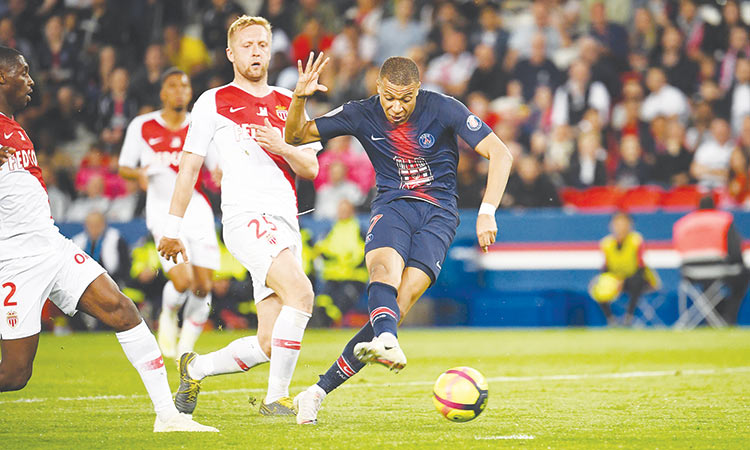