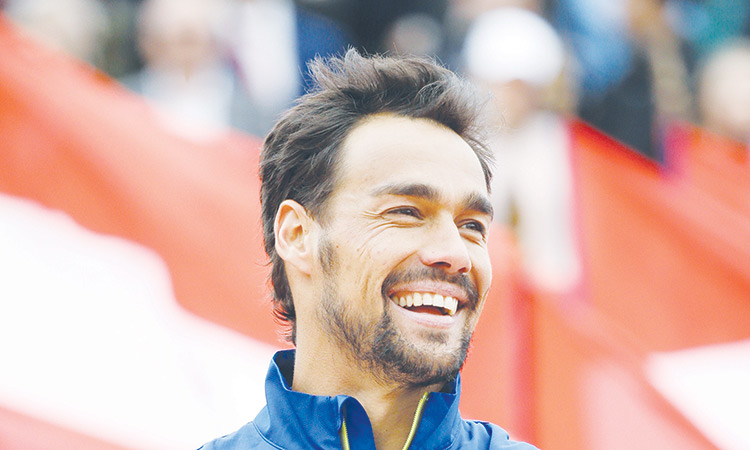 Fabio Fognini poses with the trophy after defeating Dusan Lajovic in the final match of the Monte Carlo Masters in Monaco on Sunday. Associated Press

Italy’s Fabio Fognini thrilled a crowd composed mainly of his countrymen as he defeated Dusan Lajovic 6-3, 6-4 to win the Monte Carlo Masters on Sunday.

The 13th seed based just 20 kilometres over the border in San Remo, became the first from Italy to lift a trophy here in 51 years, following on from Nicola Pietrangeli, who watched his record fall from the royal box at the Monte Carlo Country Club.

He came to the court after the trophy ceremony to pose for pictures with his new tennis heir, who was following up his shock semi-final win over 11-time Monte Carlo champion Rafael Nadal.

“I was born nearby so this is extraordinary,” Fognini, 31, said.

“I started the season rather badly, so this is unbelievable. I’m very content with this victory, especially with all of the Italians here today.”

The 48th-ranked Serb Lajovic was playing in the first ATP final of his career and got to the title match without the loss of a set.

Fognini looked to be temporarily hampered as he limped momentarily after breaking Lajovic for 3-2 in the second after claiming the opening set in 44 minutes.

During a medical timeout, he was taped on his right thigh and a heel, but carried on without apparent problems as he finished the final on his second match point as Lajovic returned long.

The winner of his first Masters 1000 trophy came to the first major week of the pre-Roland Garros run-up with a 0-4 record on the clay, the surface he grew up on.

Among his victims this week was number three Alexander Zverev, and his stunning stunning 6-4, 6-2 victory over Nadal on Saturday to end the Spanish star’s 25-set win streak in the principality.

Nadal admitted that it will be “hard to return to the practice court” after a shock semi-final.

“It will be hard to return to the practice court,” a subdued Nadal said after his fourth loss to Fognini, three of which have come on his beloved clay.

“I lost an opportunity in a very important event for me. I’m sad for that.”

“There was little chance for me to start the clay-court season in a perfect way,” he insisted.

“It was a bad day, the kind of day where the feeling is not there at all. It’s difficult to find positive ways today.”

“I was lucky to win two (second-set) games to avoid an even worse score,” he admitted.

“I’m thinking about how bad I played today, (trying to) understand the things.

“(It’s been a) year and a half of not having the chance to play tournaments in a row (due to injury).”

Nadal, who will be favourite to win a 12th French Open crown at Roland Garros, has plenty of ranking points on the line before heading to Paris, with titles to defend in Barcelona and Rome.

A slip outside the top two could set up a potential meeting with old rival Novak Djokovic, winner of the last three Grand Slam tournaments, before the final.