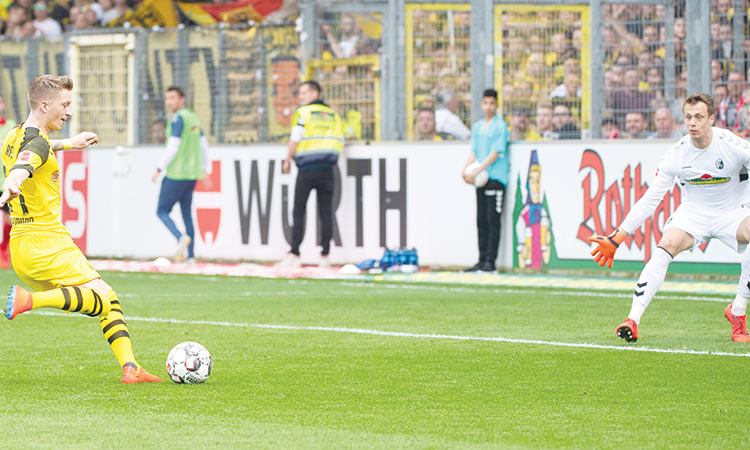 Captain Marco Reus played through the pain barrier to inspire Borussia Dortmund to a 4-0 win over Freiburg on Sunday and keep them hot on the heels of Bundesliga leaders Bayern Munich.

Reus picked up a knock to his knee under a heavy challenge from Freiburg’s Janik Haberer in the second half, but fired Dortmund to victory with a goal and two assists to keep them a point behind Bayern.

Dortmund were under pressure to pick up three points after title rivals Bayern beat Werder Bremen 1-0 on Saturday.

Far from buckling under the pressure, however, Dortmund delivered one of their most confident performances in recent weeks to fight their way past Freiburg in a nail-biting title race.

A silky move in the box saw Dortmund take the lead 12 minutes in, with Raphael Guerreiro and Marco Reus linking up to provide Jadon Sancho with a tap-in.

Guerreiro, returning to action after two weeks out injured, then set up Reus for Dortmund’s second eight minutes after half-time.

Lucien Favre’s side then survived a handful of chances for Freiburg before a brutal counter-attack saw Reus set up Mario Goetze to make it 3-0.

Dortmund face local rivals Schalke in the Ruhr derby next Saturday, before Bayern travel to take on Nuremberg the following day.

Meanwhile, One-time wonderkid Renato Sanches has repeated his desire to leave Bayern Munich after another year in which he has struggled to break into the first team.

“I have to play more, five minutes are not enough,” said Sanches, 21, after he was substituted onto the field in the 87th minute during Bayern’s 1-0 win over Werder Bremen on Saturday.

“A loan would be an option. I just want to play, whether in England, Spain or Portgual,” he said.

Sanches joined Bayern as a teenager in 2016, just weeks after winning the European Championships with Portugal and being named Young Player of the Tournament.

Bayern paid 35 million euros ($39.3m) for the much-hyped midfielder, but he failed to break into the first team in his first year in Munich.

An attempt to reboot his career on loan at Swansea City proved disastrous, and Sanches returned to Bayern last summer in the hope that he could make an impact under new coach Niko Kovac.

Yet after a promising start to the season, Sanches has made only six starts in all competitions this term, and is now openly angling for a move away.

“I am not happy here, I am working hard but not playing,” he told Kicker magazine last month.

Yet on Saturday, he also insisted that he had no problem with Bayern coach Kovac.