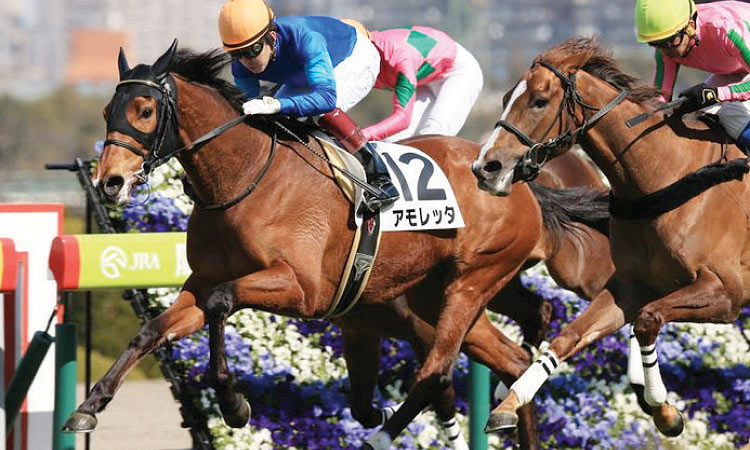 Amoreta made a winning debut on her only start to do date when scoring by a neck in a 10-furlong maiden at Hanshin in February.

Amoretta puts her unbeaten record on the line in the G2 Flora Stakes over 10 furlongs at Tokyo, Japan, on Sunday. The three-year-old daughter of Deep Impact, trained by Hideaki Fujiwara, made a winning debut on her only start to do date when scoring by a neck in a 10-furlong maiden at Hanshin on Sunday, Feb.24.

Kosei Miura partners Amoretta for the first time, who races from stall seven in a field of 18 that also includes G3 Flower Cup fourth Shadow Diva, allowance race scorers Fairy Polka and Victoria plus Passing Through, fourth in the G3 Shinzan Kinen.

Harry Sweeney, President of Godolphin in Japan, commented: “The G2 Flora Stakes is a Japanese Oaks Trial and the first two finishers are guaranteed a starting berth in the second fillies’ Classic of the year.

“It is therefore always a very competitive race and has this this year, as is usual, attracted a full gate of 18 runners.

“Amoretta will carry the Godolphin silks and deserves her chance following her winning debut in February. On that occasion, she was both keen and green and hopefully will have improved from the run.

“Her trainer, Hideaki Fujiwara, who was champion trainer in Japan last year, has described her as his best three-year-old filly, but as yet we have no real idea how she stacks up against her peers.

“We will be much wiser after Sunday.”

Meanwhile, class and consistency and a step up in distance combine to give Osborne Bulls the opportunity to add a well-deserved G1 to his record in Saturday’s G1 All-Aged Stakes at Randwick.

The All Aged is the final G1 race of the autumn in Sydney and while it won’t be Osborne Bulls’ (Hugh Bowman) last chance to win at the elite level, his three G1 second placings from his past three starts suggest he is capable of making it his first.

The son of Street Cry flashed home behind In Her Time in the G1 Lightning Stakes, did the same against Sunlight in the G1 Newmarket and then found himself in the wrong part of the track when runner-up to Santa Ana Lane in the G1 TJ Smith Stakes two weeks ago.

Acknowledging that his horse had been beaten by top-class sprinters in each race, trainer James Cummings said Osborne Bulls had nevertheless run well enough to be considered a worthy member of the top bracket, despite regarding the horse as an out-and-out sprinter, he said the 1,400m holds no fears.

“You can’t be unhappy with his form in shorter races this time in and he’s had three starts at 1,400m, including the G1 Sir Rupert Clarke, and he’s won at this trip,” Cummings said.

“In my mind he’s a six-furlong horse who I’m pushing out to seven furlongs.” Neither is Cummings concerned over the going for Saturday’s race or the horse’s condition.

“It’s fair to say he’s won more races on the dry, but more prizemoney on the wet,” he said.

“I think he might be fractionally better again this week than when he went into the TJ Smith and I believe he looks well-placed in a race that has been won by some very good G1 sprinters, including some of its recent winners, so there’s every reason to think he’ll run well.”

Osborne Bulls will be accompanied in the All Aged Stakes by the Charlie Appleby-trained D’bai (Kerrin McEvoy) whose appearance is reminiscent of that of his stablemate Jungle Cat who won the G1 Rupert Clarke on his Australian debut at Caulfield last spring.

The winner of six of his 24 starts, D’bai is a last-start winner in G2 company when first-up at Meydan having been placed in good quality G2 races at Newmarket and Doncaster before that.

Having taken advantage of the comparative abundance of 1,400m Stakes races in Australia, Appleby has a good insight into what it takes to win one at G1 level in this country.

“At six furlongs he is competitive at Stakes level, but not at the top level,” he said.

“There are some nice options for him over that trip in Australia, but we don’t have such an array of those races here in Europe.

“The reason for coming is the race is the right trip and the race style will suit him.”