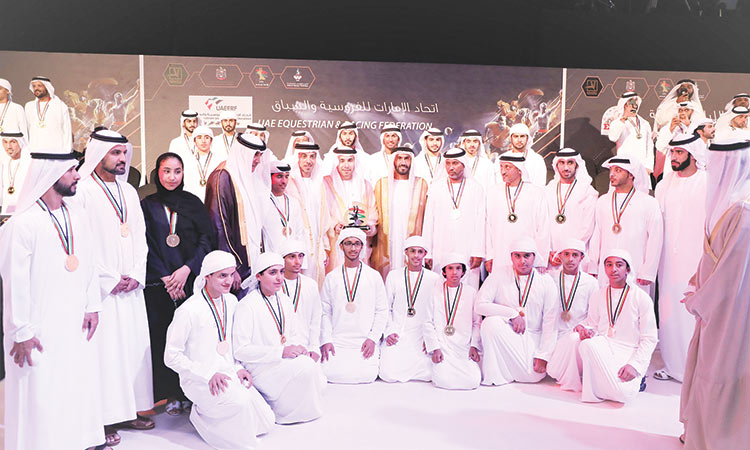 Winners pose with the officials during the awards ceremony organised by General Authority for Sports. Supplied photo

At the awards ceremony held on Tuesday organised by the General Authority for Sports at Mubadala Arena, 515 individuals were recognised for their significant contributions to the sporting world.

Based on the results of 2018, 580 medals were awarded to the UAE across various sports; including 202 gold, 193 silver and 185 bronze. Of this total, athletes competing under the UAE Equestrian and Racing Federation (UAEERF) in the various equestrian disciplines earned 148 medals — 68 gold, 41 silver and 39 bronze. With such impressive results, the UAEERF outperformed all other sports federations in the UAE and secured the title of ‘Best Performing Federation’.

During the ceremony, two show jumpers were commended for their especially outstanding performance last year – Ali Hamad Al Kirbi won the most medals out of any athlete in the UAE with a total of 13 while Omar Abdul Aziz Al Marzooqi was awarded the ‘Best Sports Achievement Award’ for winning the silver medal at the 2018 Summer Youth Olympic Games in Argentina.

Major General Dr Ahmed Nasser Al Raisi, President of UAE Equestrian and Racing Federation expressed his happiness at this historic achievement saying: “I would like to extend my deepest gratitude to Sheikh Khalifa, for the generous grants that encourage our riders to achieve the best results.”