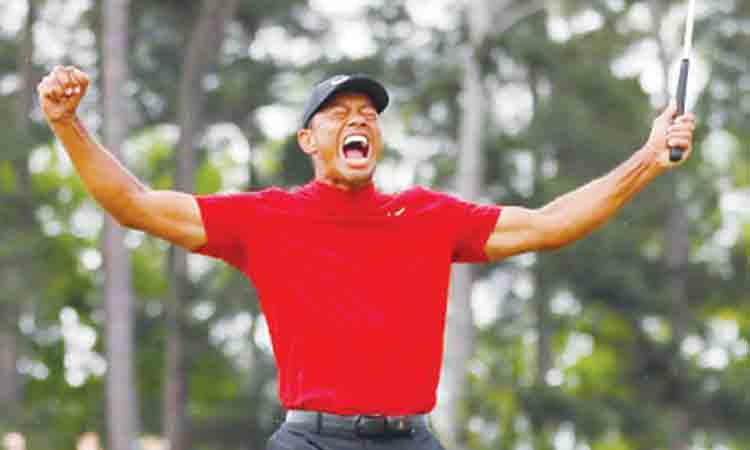 An ecstatic Tiger Woods after sinking his putt on the 18th green to win the Augusta Masters on Sunday. Agence France-Presse

Tiger Woods ended his 11-year wait for a 15th major title at the Masters. Now the golf world is wondering whether the hunt to overhaul Jack Nicklaus’s record of 18 major titles is back on.

The cheers and raw emotion of Woods’ victory at Augusta National on Sunday had barely subsided before the 43-year-old was asked about whether he would now resume his chase for Nicklaus’s record.

“You know, I really haven’t thought about that yet,” Woods said. “I’m sure that I’ll probably think of it going down the road.

Nicklaus, however, believes the record is back in play, noting that two of this year’s remaining majors -- the US Open and US PGA Championship -- will be staged at courses where Woods has won before.

“I thought for a long time that he was going to win again,” Nicklaus told the Golf Channel.

“So, he has got me shaking in my boots.” Brooks Koepka, the three-time major champion who finished one shot adrift of Woods on Sunday, also believes Nicklaus’s benchmark could be under threat. Eighteen is, I think, a lot closer than people think,” Koepka said.

“I would say that’s probably what all fans, what we’re thinking. That he’s definitely back and 18’s not far.”

“To witness that, a handful of years ago I don’t know a lot of people believed that Tiger would win another major,” said Tony Finau, who played alongside Woods and Molinari.

“From what I saw today, obviously he’s not going anywhere anytime soon.”

Last year he went from strength to strength, contending in both the British Open and PGA Championship before seizing a breakthrough US PGA Tour title at the Tour Championship in September. The revamped global golf schedule may now assist Woods on his quest for more major glory, with the PGA Championship, at Bethpage Black in Farmingdale, New York, moved up in the calendar to May 16-19.

When Woods won the 2002 US Open held at Bethpage he was also coming off a Masters win that year.

Woods was the only player to finish under par on the long, testing course, his three-under total of 277 giving him a three-shot win over Phil Mickelson.

The US Open in June will be held at Pebble Beach -- where Woods won by a stunning 15 strokes in 2000. Doubts that Woods would ever win another major, or even another tournament, long centered on two issues: the crowd of young, talented, super-fit and long-hitting players he inspired and the demands majors put on his own aging and often injured body. Assessing his impact on the game on Sunday, Woods noted that attention to physical fitness exploded in the sport thanks largely to him.

“A lot of the guys are training,” he said. “They are getting bigger, stronger, faster, more athletic.”

“Spoke to @TigerWoods to congratulate him on the great victory he had in yesterday’s @TheMasters,” Trump tweeted.

“Because of his incredible Success & Comeback in Sports (Golf) and, more importantly, LIFE, I will be presenting him with the PRESIDENTIAL MEDAL OF FREEDOM!” Trump said.