Worldwide plaudits roll in as Tiger ends years in wilderness 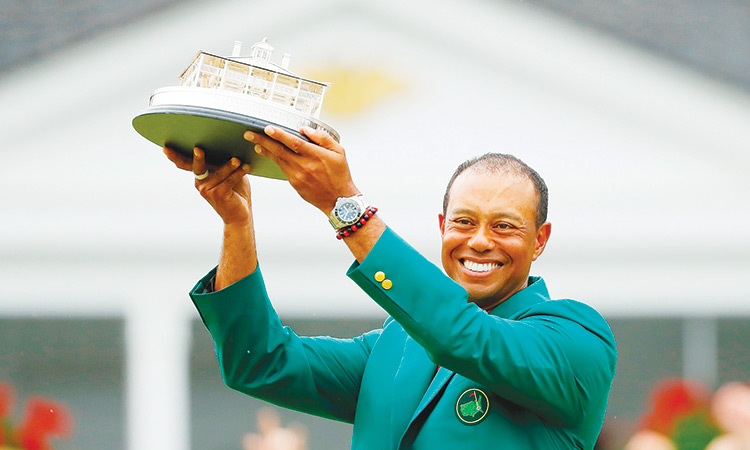 Tiger Woods celebrates with the Masters Trophy during the Green Jacket Ceremony after winning the Masters on Sunday. Agence France-Presse

President Donald Trump and Barack Obama were among those hailing Tiger Woods on social media after his 11-year major drought was ended by a thrilling and emotional Masters victory on Sunday.

“Congratulations to @TigerWoods,” tweeted the US president Trump, who played a round of golf with Woods earlier this year. “A truly Great Champion!”

“Congratulations, Tiger!” former president Obama tweeted. “To come back and win the Masters after all the highs and lows is a testament to excellence, grit, and determination.”

As Woods went on a charge on the back nine at Augusta National with birdies at 13, 15 and 16 to win by a stroke and claim his 15th major and fifth Masters, social media lit up in a frenzy of congratulations.

“I am literally in tears watching @TigerWoods this is Greatness like no other,” tweeted 23-time Grand Slam tennis champion Serena Williams.

“Knowing all you have been through physically to come back and do what you just did today? Wow Congrats a million times! I am so inspired thank you buddy.”

Fellow golfers and former greats of the game were also quick to hail Woods’ achievement in returning to the summit of the sport after multiple surgeries and a string of off-course problems since his 14th major win at the 2008 US Open.

Just two years ago his back pain was so bad Woods thought he might never play again, let alone win another major.

“Very few people really know what @TigerWoods has been thru to get back to this point,” tweeted four-time major champion Rory McIlroy, who finished in a tie for 21st on Sunday.

“So cool seeing him with Tida, Sam, Charlie, Erica and the rest of the team behind 18 green. Couldn’t be happier for him! What a great day for golf!” added McIlroy after an emotional Woods hugged his mother, children and partner Erica Herman after his winning putt.

“A big ‘well done’ from me to @TigerWoods!,” said Nicklaus on social media. “I am so happy for him and for the game of golf. This is just fantastic!”

Woods also set a record for the longest gap between Masters triumphs, the 14 years since his last win in 2005 eclipsing the old mark set by South African Gary Player who won his second Augusta crown in 1961 and his third in 1974.

“For most an impossible task. But not for you,” said South African legend Player on Twitter.

“Congratulations Tiger. So special for you and your family. So great for the game of golf. Simply unbelievable.”

Other US Sports stars were quick to join in on Twitter. “A big BIG congratulations to @TigerWoods for winning the Masters!!” NBA icon Magic Johnson tweeted. “The roar of the Tiger is back!”

Woods finally found time to respond to all his well-wishers late on Sunday night.

“I can’t thank my family, friends and fans enough for their support. Having my family by my side today is something I will never forget,” he posted on his Twitter feed, @TigerWoods, along with a picture of him wearing his newest of five green jackets.

“To not only be able to play again, but to be able to win again, is something I will forever be grateful for.

“This jacket sure is comfortable.”

Woods completed an epic comeback from career-threatening injury and scandal by winning the 83rd Masters on Sunday, capturing his 15th major title to end an 11-year major drought.

The 43-year-old American superstar, who underwent spinal fusion surgery in 2017 due to chronic back pain, seized his first major title since the 2008 US Open.

Winning a fifth Masters title, and his first since 2005, cemented a fairytale comeback to the pinnacle of golf for Woods, whose career imploded after a 2009 sex scandal and nagging knee and back injuries that required a total of seven surgeries.

With fans chanting his name, an emotional Woods walked off the 18th green and hugged his mother Kultida, daughter Sam and son Charlie just as he had embraced his late father Earl there after his first major victory at the 1997 Masters.

Racing to finish before an oncoming thunderstorm, players created their own electric atmosphere, spectators roaring repeatedly for sensational shotmaking on one of golf’s iconic stages.

Woods fired a final-round two-under par 70 to finish on 13-under 275 for a one-shot victory to capture a $2.07 million (1.82 million euros) top prize and the green jacket symbolizing Masters supremacy.