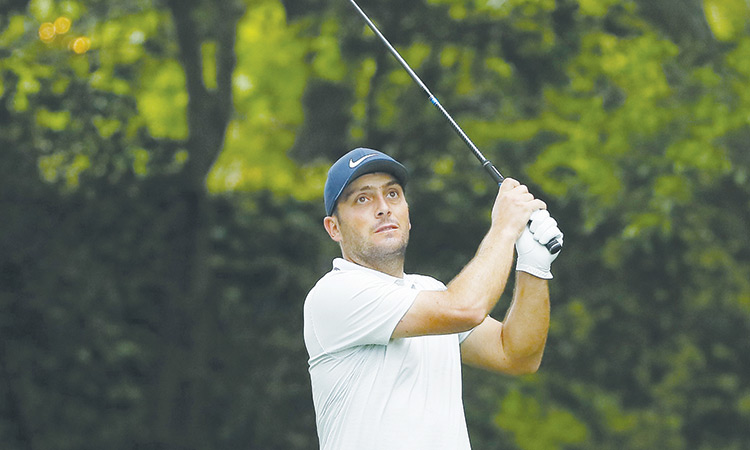 Francesco Molinari plays a shot during the final round of the Masters at Augusta National Golf Club on Saturday. Agence France-Presse

Francesco Molinari fired a flawless six-under par 66 on Saturday, seizing a two stroke lead over Tiger Woods and Tony Finau in a thrilling Masters third round at Augusta National.

After birdies at six and eight, he erupted with four straight birdies starting at the par-three 12th — where his tee shot left him inches from the pin.

He methodically rolled in putts of six, eight and nine feet to birdie the next three -- and maintained his two-shot edge by getting up and down for par from a bunker at 18.

Molinari, one of five major winners to share the overnight lead, had a 13-under total of 203.

“I played the back nine probably as good as I’ve ever played over here,” Molinari said. “So nice to keep another clean scorecard.” Woods, who won the last of his four Masters titles back in 2005 and hasn’t added to his tally of 14 majors since his 2008 US Open victory, carded a five-under par 67 for an 11-under total of 205.

He was joined by Finau, who fired a 64 -- one shot off the tournament record and matched by two other eight-under rounds from Webb Simpson and Patrick Cantlay.

Woods was also slow to join the birdie bandwagon, opening with four straight pars before a bogey at the fifth.

He responded with three birdies in a row starting a the sixth. At the seventh he stuck his approach a foot from the pin and he rolled in an 11-footer at eight.

“I got on a little roll there,” said Woods, who kept the momentum going with a par save from the trees right of the fairway at nine and sank a seven-footer for birdie at 13.

He got up and down for birdie at 15, where his chip on left him two feet, and he reached 11-under with a seven-foot birdie at the par-three 16th.

“I just did everything,” Woods said. “I drove it well and hit my irons well. I made some putts. I just let the round just kind of build.” Finau, aiming to become the fifth straight player to make the Masters his first major title, opened with three straight birdies.

Another birdie at the sixth was followed by an eagle at eight, where his second shot left him a tap-in.

“I had a pretty good number,” he said of his second shot. “I hit a really good shot, but I didn’t think it was going to be, you know, a foot from the hole.” The 27-year-old missed a 10-foot putt at the ninth that would have broken the front-nine record of six-under 30, although he wasn’t aware of the mark at the time.

Two more birdies coming in put him in a “dream” final group with Woods and Molinari -- after Augusta National officials announced the final round would be played in threesomes from both the first and 10th tees, starting early in a bid to beat severe weather predicted for the afternoon.

“As a kid I always wanted to compete against him,” said 29-year-old Finau of Woods. “I’ve dreamed of playing in a final group with him in a major championship.”

Molinari played with Woods in the final round at Carnoustie last year, when he lifted the Claret Jug. The Italian wouldn’t go so far as to say he considered it a lucky pairing, and he warned that Woods and Finau wouldn’t be the only players he had to worry about.