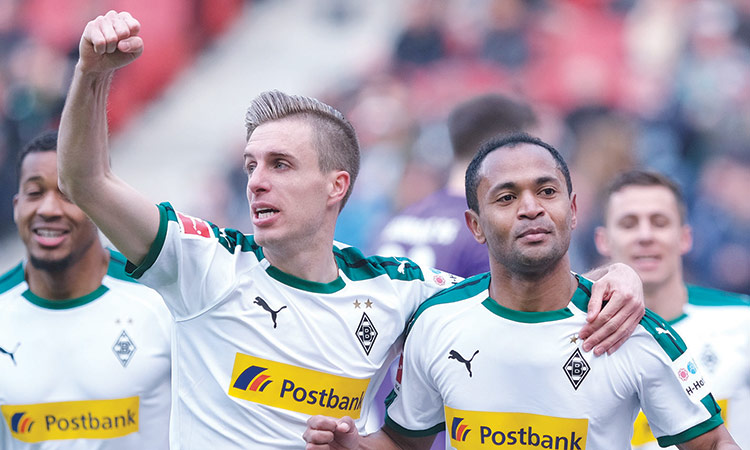 A second-half winner from Brazilian forward Raffael gave Borussia Moenchengladbach a 1-0 win over Hanover on Saturday and fresh hope of a top-four finish in the Bundesliga.

Gladbach have endured a turbulent few weeks of late, having dropped out of the top four and announced the impending departure of coach Dieter Hecking.

The win over Hanover, only their second victory in nine games, marked a timely change in fortunes and keeps Gladbach in the race for Champions League football.

“It was really important for us to finally win a game again today. It will do us a lot of good,” said Gladbach midfielder Christoph Kramer.

They now sit in fifth, a point behind Eintracht Frankfurt, who play Augsburg on Sunday.

Raffael grabbed the winner just after half-time, flicking a loose ball over the head of Hanover keeper Michael Esser.

Bottom-of-the-table Hanover created little more than a handful of half-chances on the counter-attack, and failed to add to their meagre tally of 11 home goals this season.

RB Leipzig, meanwhile, strengthened their grip on third with a comfortable win over Wolfsburg.

Kevin Kampl curled in the opener on 16 minutes, before Timo Werner headed in a second to notch his third goal in four games.

Defeat is a setback for Wolfsburg, whose fellow European hopefuls Werder Bremen and Bayer Leverkusen both won on Saturday.

Bremen snuck into a Europa League place thanks to a 2-1 win over Freiburg. Late headers from in-form Dutch midfielder Davy Klaassen and Theodor Gebre Selassie sealed the three points for the home side, despite Luca Waldschmidt’s even later consolation goal for Freiburg.

Leverkusen, meanwhile, battled to a 1-0 victory over relegation-threatened Stuttgart.

Stuttgart keeper Ron-Robert Zieler kept out Kevin Volland with a brilliant reflex save before half-time, but could not stop Kai Havertz’s coolly taken penalty just after the hour mark.

Tempers flared late on as Stuttgart’s Santiago Ascacibar clashed with Havertz and was sent off.