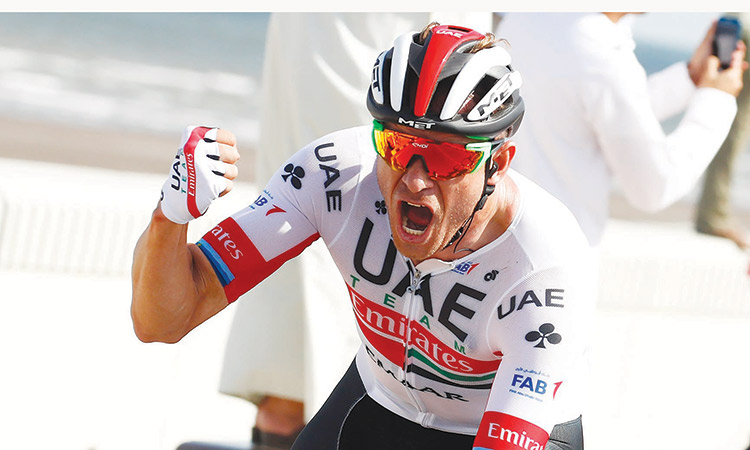 UAE Team Emirates’ preparations are underway for what is arguably the most famous and toughest one-day race of the UCI WorldTour calendar, Paris-Roubaix on Sunday.

The line-up is led by the in-form Alexander Kristoff, who picked up a race victory at Gent-Wevelgem and a podium finish at the Tour of Flanders.

He will be joined by Colombian sprinter Fernando Gaviria, who makes his Paris-Roubaix debut following his recent outings at the Belgian Classics.

The race is dubbed a ‘Sunday in Hell’ or ‘The Hell of the North’ - and the 257km route is just that. Whilst the opening 95km don’t throw up too many obstacles for the peloton, it’s the second half of the race where the ‘hell’ really begins and the most mouth-watering of the action tends to happen.

At 96.5km, riders encounter the first of 29 cobbled sections of the course, and it’s here where they will begin to fight the elements; bumpy cobbles, dusty roads and narrow streets all have potential to wreak havoc on the riders and their bikes.

In total, there’s over 54km of cobbled roads, with three significantly bumpy sections given a five-star rating for difficulty.

These sections will undoubtedly pull the group apart as they make their way towards the finish in Roubaix.

History shows that a bunched sprint finish is highly unlikely, but a thrilling battle between a small group of riders should be on the cards, played out in front of the thousands of spectators that pack into the world-famous Roubaix Velodrome to witness the final metres of the races.

Commenting ahead of the race, UAE Team Emirates’ General Manager Joxean Matxin said: “Considering the good run of form and performances our cyclists have, we can look towards Paris-Roubaix with optimism.

Our wish is to close the northern classics campaign with a significant result. Our goal is clear, a victory in the Hell of the North and just the desire to do well.

Kristoff will captain our team. He has been very effective so far and wants to set the record straight in Paris-Roubaix after a fall last year prevented him from being a sure protagonist.

We will have riders at his side to offer a great contribution and Fernando Gaviria who, despite debuting in the race, has the necessary talent to go strongly.”