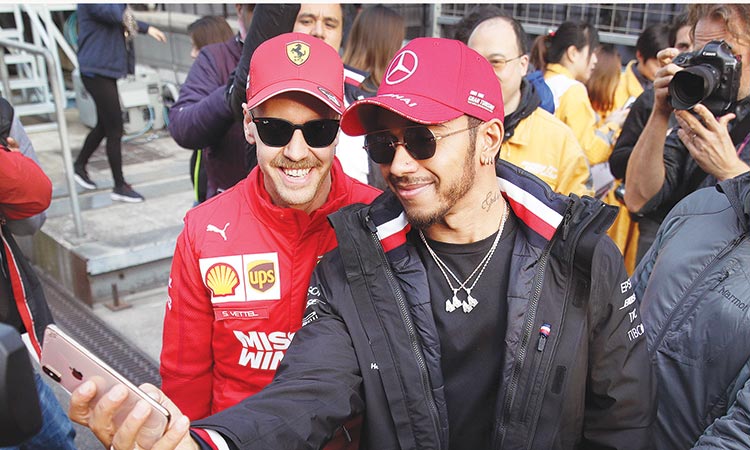 Mercedes’ Lewis Hamilton takes a selfie with Ferrari’s Sebastian Vettel at the Shanghai International Circuit ahead of the Chinese Formula One Grand Prix on Thursday. Associated Press

The Mercedes star from Britain is facing multiple challenges this season, primarily from Ferrari, who go into the third race of the season with the fastest car.

But that did not stop the 34-year-old winning in Bahrain two weeks ago after the Ferrari of Charles Leclerc lost power towards the end.

“It’s absolutely no different to any other race weekend for me.

I’m here to do one job, and one job only, and that’s win.

That steely resolve looks set to be put to the test this weekend in Shanghai, where the Briton has triumphed five times and is a crowd favourite.

Shanghai has one of the longest straights in Formula One, which will suit Ferrari’s searing pace.

Hamilton does not expect his Mercedes team to have closed the gap in that department, and sees the Red Bull team as a serious threat too.

Cautioning however that the season is in its infancy, Hamilton said that he hopes to beat the Ferraris of Leclerc and Sebastian Vettel fair and square, rather than hope they suffer some kind of mechanical problem.

“Qualifying was ok in the last race, but the race was a big delta (to the Ferrari speed).

“I hope this weekend is closer between us because this is a great track to have a real race.

“The closer it is, the better.”

Fast-rising Ferrari star Leclerc said on Thursday that he must shut out the growing hype surrounding him if he is to win his maiden Formula One race.

The 21-year-old from Monaco goes into the Chinese Grand Prix on Sunday -- widely touted as the next big thing to grace the sport.

He came an agonising third last time out, in Bahrain, after leading for much of the race until his Ferrari lost power, allowing Hamilton to snatch victory.

Speaking in Shanghai, the third race of the season, Leclerc conceded that getting himself on the podium for the first time had propelled him into the spotlight.

“After the first race (Australia, where he was fifth) nobody sees me as a title contender,” he said.

“After the second race, everyone sees me as a title contender so things can go (change) very quick in Formula One.

“I need to keep the focus on what I’m doing in the car, work as hard as possible and try to do the best job in the car and outside the car, and I’m pretty sure the results will come.”

Leclerc, in only his second season in F1 and first with the famed Ferrari team, added: “The win was very close (in Bahrain) and hopefully I’ll get my first win soon.

“That’s the target and that’s what I’m working for.”

Leclerc trumped his Ferrari team-mate and four-time world champion Sebastian Vettel in Bahrain, with the German coming fifth and alarmingly off the pace.

Leclerc smiled when it was put to him by reporters that he was on the brink of becoming a sporting household name.

“The people seeing your face on the podium changes quite a bit,” he said, adding that he was now getting widely recognised back home in Monaco.

“Formula One is one of the sports in which you don’t actually see the face of the athletes until you go to the podium (because of their helmets) or do something good.”