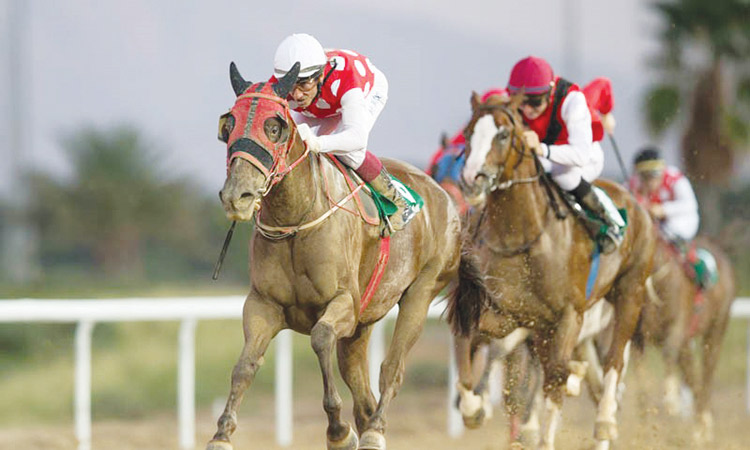 Al Ain Sprint will be the highlight of a seven-race card final meeting of the Al Ain season. Supplied photo

The race has attracted a field of eight, including Ghazwan Al Khalediah, victorious on both his two most recent outings.

Trained locally at The National Stables, the 7-year-old was actually unraced before this season, making a winning debut over 1400m at Al Ain in November when he appeared a very exciting prospect. However, he then twice disappointed somewhat when finishing fourth back at Al Ain, then Jebel Ali, over 1400m before being dropped to 1000m for his penultimate start in early February. That resulted in a smooth victory and, a month later, he won again even more impressively. That was four weeks ago under Antonio Fresu, who is again in the saddle.

Al Alawi explained: “We have always really liked this horse, but had to be very patient with him since we bought him in Saudi Arabia because he needed plenty of time. He won well on debut and has again his last two starts. This is a stronger race, but he deserves the step up in class and we are hopeful.”

Richard Mullen won on Alawi’s charge on his penultimate start, but is aboard Lou Raynal in this for Yousif Bin Ghilan. A course and distance winner on his local debut, in January, he did not stay 3200m on his next outing and has been well beaten three times since over 1600m. Reverting to 1000m should suit him.

However, Eric Lemartinel would appear to saddle the main dangers to the remaining six with both the penalised RB Torch, the mount of Jesus Rosales and dropping in class for UAE President His Highness Sheikh Khalifa Bin Zayed Al Nahyan, as well as RB Money To Burn holding strong claims.

The latter also has a penalty, but remains unbeaten after three starts, having made a winning debut here at Al Ain over 1400m in November before, four weeks later, winning the 1600m Listed Abu Dhabi Championship on the Abu Dhabi turf.

She has shown plenty of speed in all three starts when, arguably, she has yet to be headed and she must go close under Fabrice Veron who is seeking a third victory on the exciting filly.

The only Thoroughbred race, a 2000m handicap, will be contested by the maximum field allowed of 15 and, as is typical in these races, looks absolutely wide open.

For Satish Seemar, Mullen partners Pertinacious, having his first start for the master of Zabeel Stables and owner Nasir Askar, having previously been trained by Mike de Kock for Sheikh Mohamed Bin Khalifa Al Maktoum. A 4-year-old Smart Strike gelding, he was, as a juvenile, a very promising second over 1400m on debut at Jebel Ali, but has subsequently been disappointing in five outings. A change of scenery could spark a revival.

Hello, the choice of Fernado Jara from three Ali Rashid Al Rayhi runners, made a bright start to the campaign, winning over 1950m and 1800m at the first two Jebel Ali meetings of the season, but has been inconsistent since, including when well beaten over this 2000m in January.

However, the 6-year-old gelded son of Teofilo, owned by Mohd Khalifa Al Basti, did win over course and distance last February.

Logistics has not been seen in racecourse action since December 2017 when, on his final start for Alawi, he won over 1400m at Jebel Ali. The mount of Antonio Fresu, 496 days later, he will be having his first outing for Erwan Charpy, who is more than capable of winning with a horse after such a long absence.