More ready than I’ve ever been for major win, asserts Fowler - GulfToday

More ready than I’ve ever been for major win, asserts Fowler 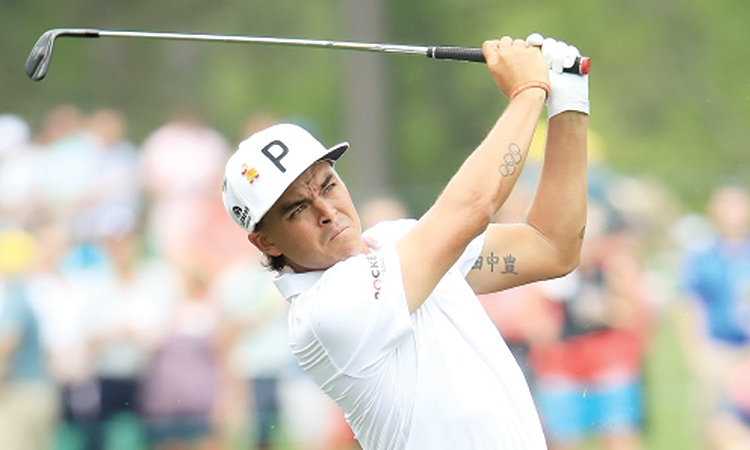 Rickie Fowler plays a shot during a practice round prior to The Masters at Augusta National Golf Club on Monday. Reuters

Rickie Fowler, eight times a top-five major finisher without winning, says he has never been so prepared for a breakthrough triumph as he is at this week’s Masters.

“I’m more ready than I’ve ever been,” Fowler said Monday. “Not saying that I can sit up here and tell you I’m definitely going to go win, but I like my chances.”

Ninth-ranked Fowler, now in his 10th PGA campaign, famously had top-five finishes in all four majors in 2014 -- a full-year feat only Jack Nicklaus, Tiger Woods and Jordan Spieth have matched.

But unlike those US stars, Fowler couldn’t claim a victory, sharing second at the US and British Opens, third at the PGA Championship and fifth at the Masters.

Fowler shared fifth at the 2017 US Open and PGA Championship then chased eventual champion Patrick Reed over Augusta National’s back nine in a dramatic bid for a green jacket.

Fowler made birdies on six of the last 11 holes to challenge Reed after starting the day five strokes adrift, a closing birdie pulling him within a shot. But Reed sank a five-foot par putt at 17 and a four-footer at 18 for a one-stroke triumph.

“Last year was big, just playing well on the weekend, executing that final nine and hitting shots when you’re under the gun in the moment and under all that pressure,” Fowler said.

“I also think that getting a win earlier this year at Phoenix, getting over all the stuff that happened there, yeah, I’m more ready than I’ve ever been.” Don’t mistake confidence for the cockiness of a more youthful Fowler, who challenged Augusta customs by wearing a cap backwards in speaking with reporters.

“I don’t think you could ever say, ‘This is my time. I’m going to go win,’” Fowler said. “You have to go win it and then say it afterwards.” Unlike many top players, Fowler played last week in Texas rather than skip the week before the Masters, honing his golf game to sharpness.

“Definitely feel good where the game is at,” Fowler said. “I was able to check a lot of boxes leading into this week and make sure everything is either where I want it or figure out the few things I want to work on and tighten up going into this week.”

After shooting 65-67 on the weekend last year, Fowler has good memories to draw from if he can once again put himself in the hunt for a major title on Sunday.

“Just have to do one better,” Fowler said. “A lot of confidence was taken from last year. The way I executed on the back nine Sunday last year was definitely something I pull from, and it was a lot of fun to be in the mix.

“Have a chance. But time to do one better.”

Meanwhile, Japan’s Takumi Kanaya, who punched his ticket to a first Masters appearance with a victory in the Asia-Pacific Amateur in October, has been getting some advice at Augusta National from compatriot Hideki Matsuyama.

“I have played two days with Hideki here, and he’s taught me many things,” Kanaya said Monday as he and Mexican amateur Alvaro Ortiz met reporters.