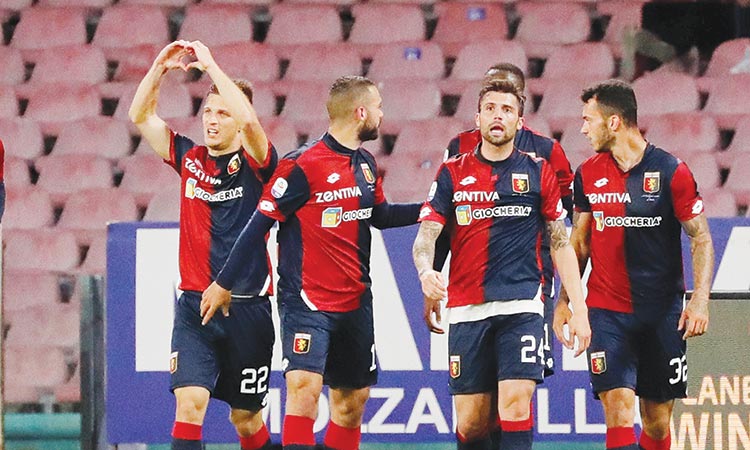 Genoa’s Darko Lazovic celebrates with team-mates after scoring against Napoli during their Italian League match on Sunday. Reuters

Napoli drew 1-1 with ten-man Genoa on Sunday to ensure that Juventus will have to wait another week to seal an eighth consecutive Serie A title.

The champions have a 20-point advantage on second-placed Napoli, who they have beaten in both their head-to-head clashes, with seven games to go.

Juventus, who beat AC Milan 2-1 on Saturday, needed Napoli to lose to win the Scudetto for the 35th time, ahead of their Champions League quarter-final first leg against Ajax next week.

A draw next weekend at lowly SPAL would be enough for Massimiliano Allegri’s side to win the title which would be the first in Italy for Cristiano Ronaldo.

Despite their numerical advantage, Napoli struggled to contain the visitors who inflicted the only league defeat this season on Juventus last month.

Genoa went a man down when Stefano Sturaro was sent off on 28 minutes following a VAR review for a diving studs-up tackle on Allan.

Dries Mertens blasted in the opener on 34 minutes, but Darko Lazovic pulled Genoa level just before the break.

Genoa goalkeeper Ionut Radu ensured his 14th-placed side went away with a point with a string of fine saves including two late on Mertens and Kalidou Koulibaly.

“It was an unexpected performance that makes an alarm bell ring, if we play like this in London, then we’re in trouble,” said Napoli coach Carlo Ancelotti ahead of next week’s Europa League game against Arsenal. We absolutely must wake up, demonstrate the value and potential that this group has and find our true identity.

“Luckily we have four days to fix things.”

Atalanta -- without suspended star striker Duvan Zapata -- missed the chance to move fourth and into the Champions League berths at the expense of AC Milan who fell 2-1 at Juventus on Saturday.

Inter are third on 57 points -- a massive 27 points behind Juventus — with Milan five points adrift of their city rivals.

Bergamo side Atalanta are equal on points with Milan but behind in fifth position on goal difference.

Juventus will claim an eighth Serie A title — with a record seven games to spare — if second-placed Napoli slip up at their San Paulo Stadium.

The Turin giants have a 21-point advantage on Napoli and have won both their direct clashes with Carlo Ancelotti’s side this season.

In Milan, Icardi returned to the San Siro for the first time since a defeat to Bologna on Feb.3, and was greeted with a mixture of whistles and cheers from the home crowd.

The Argentina striker had scored on his return at Genoa last weekend after six weeks out after being stripped of the captaincy over a contract dispute.

Teammate Matias Vecino thought he had scored minutes into the game but the goal was disallowed for offside, with Icardi also denied early.

Atalanta missed Colombian ace Zapata, who has scored 20 times this season, as he sat out the game after his yellow card in a 4-1 win over Bologna last Thursday. The visitors best chance came after 48 minutes when Alejandro Gomez failed to connect with a great Josep Ilicic cross in front of the goalmouth.

“I don’t want to talk about Icardi because I am always talking about him. There are other players as well,” said Inter coach Luciano Spalletti.

“Icardi has to come back and exchange passes with the midfielders, as he did a bit more today, and run for the team, as all complete strikers do.”

Spalletti said he liked Inter’s overall display. “We played in a compact fashion, putting in a good performance and this is a good sign, one which makes me think that we can achieve our goal.”

The race for Champions League football next season remains tight with just Atalanta, Roma, Lazio and Torino all within touching distance of the top four. Claudio Ranieri’s Roma returned to the Europa League places after a 1-0 win over Sampdoria on Saturday, and are sixth one point off the Champions League spots.

Lazio were held 2-2 at home against Sassuolo and sit seventh, three points off the top four, but with a game in hand, and just ahead of Torino.

Senad Lulic grabbed a point for Lazio five minutes into injury time to rescue a draw after their midweek defeat by SPAL.

Fiorentina drop to 12 points off the Europa League berths, with coach Stefano Pioli’s position at risk.