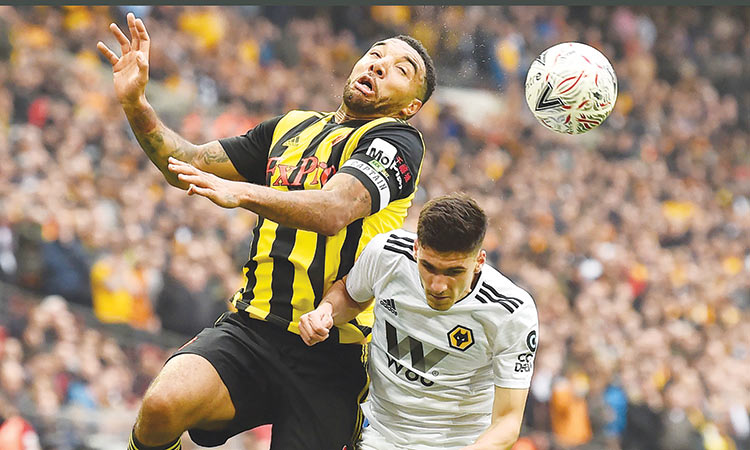 Watford achieved mission improbable on Sunday to win an FA Cup semi-final that had looked lost but their next Wembley task looks more like mission impossible when they have to halt an apparently unstoppable Manchester City in the final.

Troy Deeney, the striker who epitomises Watford’s never-say-die quality, was quick to offer a defiant message to the quadruple-chasing English champions.

Despite English bookmakers being quick to install Watford as 7-1 long shots in a two-horse race, Deeney, the club’s 30-year-old stalwart, warned: “We’re going to show we can beat them.” After his major part in Watford’s unlikely comeback from 2-0 down with 11 minutes left which saw them prevail after extra time, Deeney sounded like a man who now feels anything is possible with his “special” team.

“We know Man City are a real formidable team, one of the best in Europe, but it’s a one-off game,” he told BT Sport.

“We’re coming in with belief, we’re not naive enough to think it’s going to be easy but we know this hard work can take us a long way.

Advertisement “This team has got something special. We’re not the most talented but the hard work, the desire, you see it there.

“Two goals down, many teams would have called it a day but we kept going, brought the little man (two-goal Gerard Deulofeu) on, added his bit of magic, and the rest is just hard work.”

Watford have twice lost to City in the Premier League this season and lie 10th, 34 points behind a club who are two points off the top with a game in hand, who have already won the League Cup and who are in the Champions League quarter-finals.

Certainly, there was no comparison between the two semi-finals in the excitement levels at Wembley. Deeney was at the centre of the highest drama in the 94th minute when, with Watford still 2-1 down, he was brought down in the box by Leander Dendoncker.

Awarded a penalty, he had an agonising wait to take it as VAR reviewed the incident, only to then nervelessly blast the kick into the net.