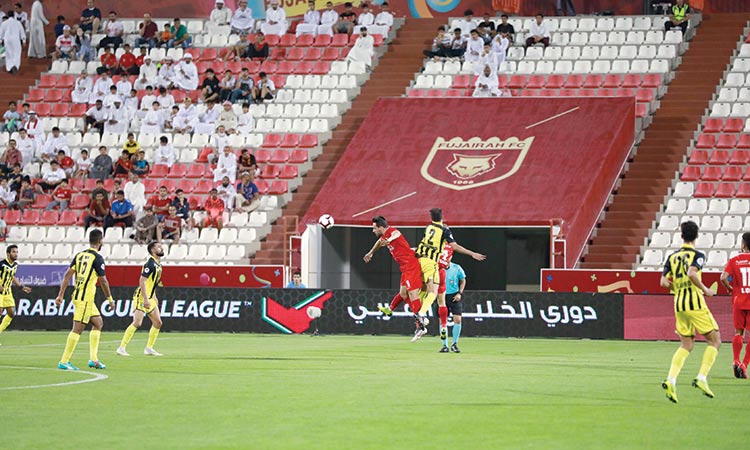 Ittihad Kalba and Fujairah players in action during their AGL match on Friday.

Ittihad Kalba conceded two own-goals as they played out a dramatic 3-3 draw with Fujairah in matchweek 19 of the Arabian Gulf League on Friday.

Kalba got off on the wrong foot as they gave Fujairah an early 1-0 lead, thanks to Yaqoub Alblooshi’s own goal. Alblooshi, who was trying to clear the ball, mistakenly slotted it past Kalba keeper Mohamed Albairaq to give the hosts a 1-0 advantage.

The guests, however, equalized quickly as Balazs Dzsudzsak leveled things up on the 10-minute mark. The ball fell to the Hungarian midfielder following a defensive blunder and he fired a powerful strike from outside the box to make it 1-1.

The home side had a number of chances to level the scoreline but were denied by Albairaq as the Tigers took a 2-1 lead into halftime.

Fujairah equalized just before the one-hour mark through Fernando Gabriel. The Brazilian forward found Samuel Rosa’s pass on the edge of the box, only to send a powerful strike into the left corner of the net.

Kalba’s struggles were compounded as they conceded another own goal in the 66th minute. The ball deflected off Kalba’s Hamad Alhammadi into his side’s own net to give Fujairah a 3-2 lead.

The Tigers, however, weren’t deterred and continued fighting. They were able to level the scoreline once again with 18 minutes to go. Myke Ramos got his name into the scoresheet as he headed the ball off Dzsudzsak shot to make it 3-3.