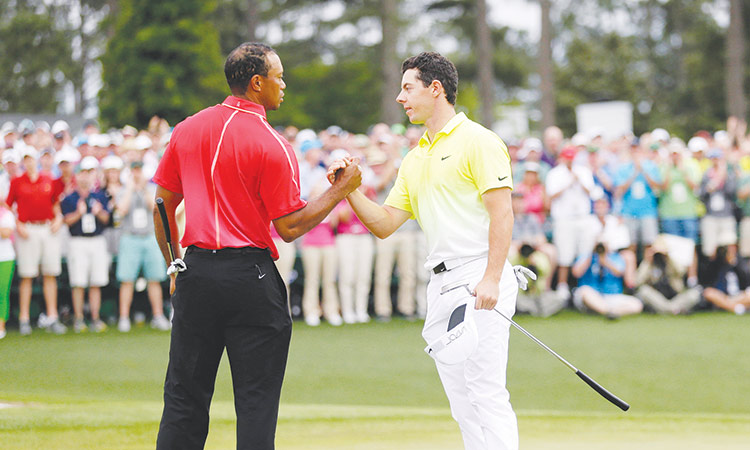 In this April 12, 2015 photo, Tiger Woods (left) shakes hands with Rory McIlroy at the Masters in Augusta. File / Associated Press

The Masters should have been the first major Rory McIlroy won. Now it is the only one he is missing.

Augusta National was thought to be the domain of Tiger Woods when he won four green jackets before turning 30.

Now he is 43, with eight surgeries behind him, so far removed from his last Masters victory that the club has changed chairmen twice since he last won 14 years ago.

McIlroy and Woods are the central figures at the 83rd Masters, which starts Apr.11. They share the stage with a cast of characters that gets deeper and stronger every year, so tough that 23 of the last 25 major champions were among the top 25 in the world ranking.

One is looking to join the most elite group in golf by capturing the final leg of the career Grand Slam.

The other is looking to recapture glory on a course where his red shirt was blazing among the azaleas, dogwoods and all the colors of springtime in Augusta.

Woods has always had a hold on the Masters, so much that his Sunday shirt packed as much interest as the green jacket. To see him two years ago walk gingerly to the Masters Club dinner for past champions was to wonder if he would ever shine at Augusta, much less play. It was only a few weeks later that Woods had a fourth surgery on his back to fuse the lower spine.

He not only returned, Woods capped his remarkable comeback by winning in Georgia last year for his 80th career victory on the PGA Tour. But it was at East Lake in late September, not at Augusta National the second week in April.

“I’m right there where I need to be,” Woods said.

“I’ve gotten a little bit more consistent with my play, and I think that everything is headed on track toward April.”

His last two majors were telling because he was in the hunt at both of them until the final hour. He briefly had the lead at Carnoustie in the British Open. He chased Brooks Koepka all the way to the finish line in the PGA Championship. McIlroy had reason to think he would be allowed upstairs in the champions’ locker room by now. It was in 2011 when he had a four-shot lead, only to throw it away with a tee shot behind the cabins, a four-putt from 12 feet, a wild drive along the azaleas and an 80 on his scorecard.

He responded by winning four of the next 15 majors, before being slowed by a few nagging injuries.

This will be his fifth shot at the career Grand Slam, and he is getting closer.

“But if I don’t, I’m OK. Maybe some people will say that I’m not motivated enough. Believe me, I am motivated to make the most of what I have and to put my name among some of the greats of our game.”

This figures to be his biggest test. So powerful is the allure of Augusta National and the exclusivity of the club and its list of winners that players have been haunted over the years at being left out, whether it was Greg Norman or Tom Weiskopf, David Duval or Tom Kite. That’s just the mystique. Equally tough will be the players Woods and McIlroy are trying to beat.

McIlroy at No. 3 is among five players who are vying for No. 1 in the world - Justin Rose, Dustin Johnson, Brooks Koepka and Justin Thomas are the others.