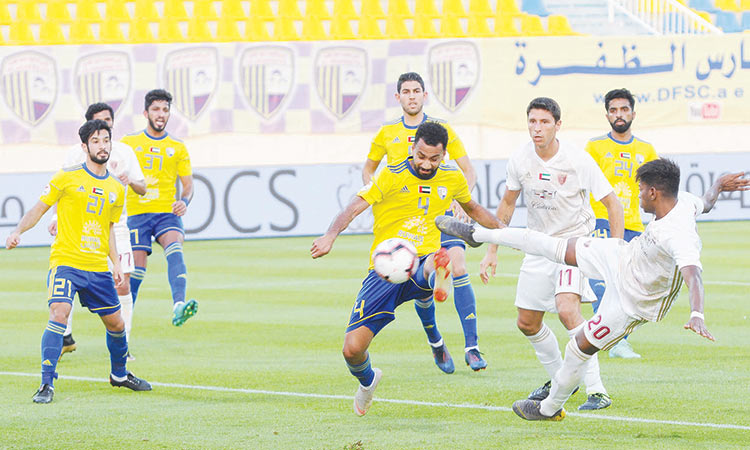 Al Dhafra and Al Wahda players in action during their AGL match on Thursday.

Yahya Alghassani’s opener was cancelled out by Suhail Almansoori’s goal as Al Wahda and Al Dhafra played out a 1-1 draw at Hamdan bin Zayed Stadium in matchweek 19 of the Arabian Gulf League on Thursday.

Al Dhafra were controlling the possession in the early phases of the first half, but without posing threat to Al Wahda’s goal.

It was Al Wahda who would have the first pickings when they broke the deadlock around the 15-minute mark, thanks to Yahya Alghassani’s goal. Ismaeil Matar’s free-kick was brilliantly saved by the Al Dhafra keeper Khaled Alsenaani, however, the rebound fell to Sebastian Tagliabue who passed to Alghassani and the latter tapped home to give the guests a 1-0 advantage.

No real chances were created in the 15 minutes that followed the goal, with most of the action taking place in the midfield.

However, the hosts levelled the scoreline 10 minutes before the break. Capitalizing on a defensive mistake from Al Wahda, Suhail Almansoori found the ball inside the box and slotted home past helpless Mohamed Alshamsi as they headed into halftime deadlocked at 1-1.

In the second half, Al Dhafra relied on counter-attacks, while the guests put more pressure on the home side’s defense.

Tagliabue’s effort on the one-hour mark missed the target, before Almansoori attempte his luck on the other side of the field few minutes later.

Al Wahda’s substitute Ahmed Ali came close to netting the winner in the dying minutes of the game. However, his first effort hit the woodwork and his second attempt sailed over goal frame.

Al Jazira could not have asked for a better start to their Arabian Gulf League clash with Ernest Asante opening the scoring in the third minute before Ali Mabkhout doubled the lead just before the half-hour mark. Although, Al Ain reduced the deficit, the home fans were again celebrating. Nacer Barazite, who had earlier saw his effort ruled out for off-side just moments earlier, restored the two-goal cushion at half-time.

The hosts picked up where they left off, continuing to dominate and were rewarded with Asante and Mabkhout again finding the net to complete a convincing triumph. The result, which saw Al Jazira reclaim third place, ensured Al Jazira completed the league double over Al Ain and Hertog was delighted with what he saw.

“I am delighted and very proud of my team for the way they played,” said Hertog during the post-match press conference.

“We played excellent football and created many chances against a very good side. We did our homework on Al Ain and the players executed the plans perfectly.

“I must compliment my players on their outstanding performance as it was a much deserved victory. Every single player did fantastic and am pleased with all of them. This will give us a lot of confidence for the next game.”

He added: “I am also happy that we had young players like Mohamed Al Attas, Abdullah Ramadan and Khalifa Al Hammadi, who gave their best. They showed they can play at the top level in this league and it’s great to see them develop.”

Despite claiming the three points, Khalfan Mubarak, Mohamed Al Attas and Abdullah Ramadan all suffered injuries and Hertog is hopeful the trio can feature again this season.

“Khalfan could be out for a couple of weeks while Al Attas and Ramadan should be fit soon. We have had injuries before but this is part of football and gives other players in the team to play.”

Al Jazira will play their next match away to Kalba on April 13.