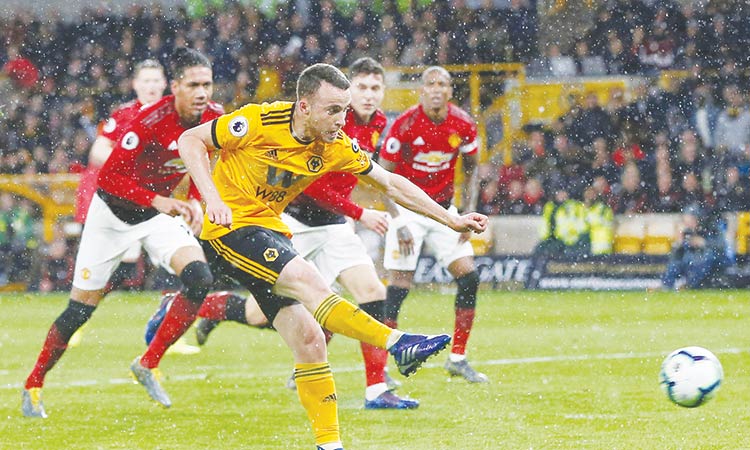 Ole Gunnar Solskjaer’s side blew a chance to move into third place in the Premier League as they squandered the lead in a disappointing display at Molineux.

It was a frustrating night for Solskjaer, who saw United suffer a third defeat in their last four games -- underlining how much work the Norwegian still has in front of him following his appointment as permanent manager last week.

Scott McTominay’s first goal for United was negated by Diogo Jota before the interval, but the game’s turning point proved to be a second yellow card collected by Young with just 57 minutes gone.

The awkward attempt saw Smalling and goalkeeper David de Gea become entangled, with the former making the final touch as the ball rolled over the line.

McTominay’s memorable first ever goal in professional football had come after just 13 minutes and a solid, controlled start by Solskjaer’s team.

A patient left-wing build-up ended with Jesse Lingard playing the ball centrally to Fred, with the Brazilian quickly moving it sideways to Scotland international McTominay.

The 22-year-old unleashed a brilliant, right-foot finish from 25 yards that beat the diving Rui Patricio and nestled in the far left-hand corner.

It might have been an even healthier position a few moments later, but Romelu Lukaku impeded McTominay as his team-mate lined up another shot from similar range.

But with Wolves’ defence looking curiously disorganised, there was still opportunity for Lukaku to chip in a dangerous centre for Lingard, whose close-range header was pawed away to safety by Patricio.

The goal lead was just reward for a strong start by United, with Lingard surging forward directly from kick-off and unleashing the game’s first shot with just five seconds gone.

There was also a promising attack which saw Fred spray the ball wide to Diogo Dalot whose hanging cross found Lukaku, only for the Belgian to guide his header directly at the keeper from six yards.

However, United succumbed to the first period of pressure placed upon them by the home side, who had already beaten them in the FA Cup just weeks ago.

First, an unfortunate rebound off Dalot allowed Willy Boly to play through Jimenez who hurried a 24th-minute shot.

Just seconds later, United were not so lucky after a poor clearance from De Gea, and even worse control by Fred, saw him lose the ball to Moutinho with Jimenez pouncing on it and playing in Jota.

The Portuguese forward did not need a second invitation to advance and calmly beat De Gea for the equaliser.

Meanwhile, Fulham were relegated from the Premier League as a 4-1 thrashing against Watford brought a fitting end to their turbulent one-season stay in the top flight.

Scott Parker’s side had to avoid defeat at Vicarage Road to stave off their inevitable demise for a few more days.

But second-bottom Fulham, 16 points from safety with five games remaining, slumped to a ninth successive loss that confirmed their relegation to the Championship.

Fulham’s fate was sealed in the second half when Will Hughes, Troy Deeney and Kiko Femenia all netted for Javi Gracia’s men in the space of 12 minutes.

On Saturday, bottom-of-the-table Huddersfield became only the second team after Derby in 2008 to be relegated from the Premier League in March with six games left.

Three days later, Fulham followed Huddersfield through the trapdoor in what ranks as the third earliest relegation in the Premier League era.