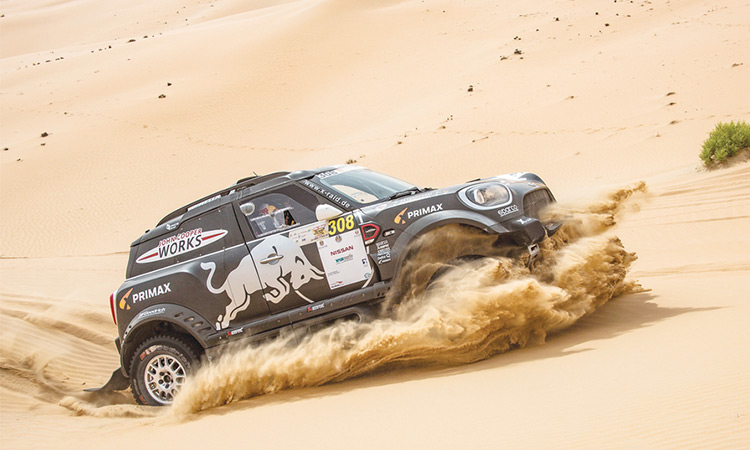 ABU DHABI: After another day when the Rub Al Khali teased and frustrated many of the world’s top drivers and riders, Stephane Peterhansel and Sam Sunderland have retained their lead roles in the Abu Dhabi Desert Challenge Powered by Nissan.

Winding through the mighty dunes for 297.9km, the Nissan Stage is traditionally the event’s most demanding, and so it was again as Poland’s Jakub Przygonski set the fastest time of the cars in his Mini John Cooper Works Buggy.

This still left him fourth overall, with Peterhansel and wife Andrea in a Mini JC Works Rally, second quickest on the day, finishing the leg with a 4 mins 23 mins overall lead from Dutchman Bernhard Ten Brinke who had a troublesome day in his Toyota Hilux Overdrive.

With the UAE’s Khalid Qassimi in the Abu Dhabi Racing Peugeot 3008 DKR and Czech defending champion Martin Prokop in a Ford Raptor RS Cross Country also well in the mix, the top five were split by just 15 minutes with two stages totalling 500km in length remaining.

The early part of the Nissan stage trapped a succession of cars in soft sand, and the rally continued to play with the spirits of Saudi Arabia’s Yazeed Al Rajhi. Stranded in the desert with transmission problems on the opening leg, he bounced back to win the next day’s stage but retired early on today.

Returning to the bivouac he had to wait while engineers assessed engine and exhaust problems before deciding whether his Toyota Hilux could re-start on the fourth leg.

Sunderland, who has known glory and a fair mixture of frustration in previous years, ended the day with a 12 mins 48 secs lead, although he will not be taking a second bikes triumph in two years for granted.

He collected his second stage win in three days, taking it by 2 mins 51 secs from Argentine KTM team-mate Kevin Benavides.

But it is the younger of the Benavides brothers, Luciano on a KTM, who now lies second, with the winner of the previous day’s stage, Chilean Honda rider Jose Cornejo, in third.

American Casey Currie in a CAN AM Maverick X3 leads the buggies category by 1 min 10 secs from Brazil’s Reinaldo Varela in another CAN AM. In the battle of the quads, Russian Aleksandr Maksimov on a Yamaha Raptor holds a 56 seconds advantage over Kuwaiti Fahad Al Musallam, also riding a Yamaha.

Stage winner Przygonski said at the finish: “In the middle of the stage there was three of us in one group. We were behind Al Qassimi for a while and we tried to pass. However, he had great pace and we could not make the move.”

Qassimi completed the leg to say: “It was a nice stage today and it was good to open it. We found and kept our momentum so others couldn’t pass us. It was an enjoyable day with a lot of variety and a lot of soft sand.”

Ten Brinke said: “We began the stage very quick then we caught up with Yazeed and saw he had a problem. Next we caught up with Jakub. Unfortunately shortly after that our left front tire exploded coming along a fast straight. We managed to change it but another 10km in the stage we had another puncture.”

Composed but certainly not complacent at the end of the stage, Sunderland said: “Today’s stage was tough but it’s never easy in this desert. I pushed until refuel to catch everyone. You always have to be strategic and it’s never done until it’s done. Anything can happen up to the finish line.”

Luciano Benavides reflected: “Today was good fun. I had a little problem with the road book. A bit confusing at times. Overall much better than yesterday - bike is running very well.”

Finishing the day in ninth place after a troubled first two legs, the UAE’s reigning FIM world champion Mohammed Al Balooshi said: “It was much better today with the cooler weather which made it easier and I am happy to finish With the UAE’s Khalid Qassimi in the Abu Dhabi Racing Peugeot 3008 DKR and Czech defending champion Martin Prokop in a Ford Raptor RS Cross Country also well in the mix, the top five were split by just 15 minutes with two stages totalling 500km in length remaining the stage. Again there were some bad memories from last year so I’m still trying to be cautious.”