Guardiola in selection dilemma at Cardiff ahead of FA Cup semis 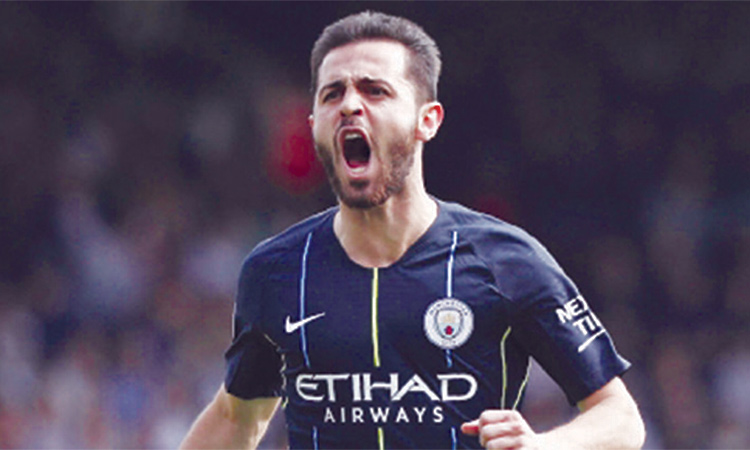 With Kevin De Bruyne’s season curtailed by injuries, Bernardo Silva has stepped up to the challenge with impressive consistency. Agence France-Presse

MANCHESTER: Pep Guardiola must decide how to shuffle his Manchester City line-up for Wednesday’s visit of struggling Cardiff to the Etihad, with an eye on the weekend FA Cup semi-final against Brighton.

City will be without injured leading scorer Sergio Aguero. A thigh injury means the Premier League’s leading marksman  —  he has 19 goals to his name — will sit it out with Brazil star Gabriel Jesus taking his place.

But Portuguese playmaker Bernardo Silva has emerged as the one player who is an almost automatic selection, despite the embarrassment of riches and depth Guardiola possesses in his first-team squad.

Signed from Monaco for £43 million ($56 million) two years ago, the 24-year-old took his time to adapt to life in the Premier League, in one of the most expensively assembled squads in the history of the game.

In his debut season Bernardo started just 15 league games, coming on as a substitute no fewer than 20 times in 38 matches as Guardiola allowed him to gradually get used to a different style of football.

But that approach and handling has proved, not for the first time in Guardiola’s managerial career, to have been a masterstroke.

With Kevin De Bruyne’s season badly curtailed by injuries, Silva has stepped up to the challenge with impressive consistency, his latest telling contribution coming with a goal in the comfortable 2-0 win at Fulham that returned City to the top of the Premier League for 24 hours, above Liverpool.

Of Guardiola’s outfield players, only defender Aymeric Laporte has started more games than Silva (27 compared to 26).

But Bernardo’s four substitute appearances mean he has appeared in 30 of City’s 31 league games to date, meaning only ever-present goalkeeper Ederson has made a bigger contribution to his club’s title defence. City forward Raheem Sterling and Liverpool defender Virgil van Dijk appear to be the frontrunners to win the player-of-the-year honours this season.

But Bernardo has also made a compelling case to be considered for an individual award with a season of breathtakingly high quality.

Meanwhile, Maurizio Sarri faces another angry vote of no confidence from frustrated Chelsea fans if the under-fire Italian fails to spark his spluttering side in Wednesday’s clash against Brighton.

In the league games since they beat Tottenham, Sarri’s side needed an inspired display from goalkeeper Kepa Arrizabalaga to narrowly beat lowly Fulham, while it took a last-minute equaliser from Eden Hazard to rescue a home draw against Wolves.

A woeful 2-0 loss at Everton was following by an even more limp effort at Cardiff, which looked certain to end in an embarrassing defeat before Cesar Azpilicueta’s clearly offside equaliser triggered their late fightback.

A repeat of that woeful display against struggling Brighton is certain to bring more opprobrium for Sarri, who has already suffered several nights on the boos at the Bridge this season.

Sarri hasn’t helped himself after aiming a subtle dig at Chelsea’s protesting fans when he said after the Cardiff escape that they would have been better waiting to see the final score before turning on him.