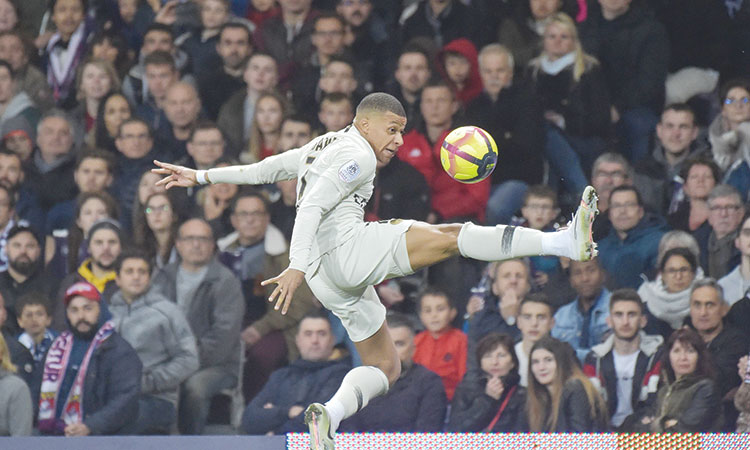 Paris: Kylian Mbappe fired Paris Saint-Germain to their eighth straight Ligue 1 win with a stunning goal that earned the champions a 1-0 victory at Toulouse on Sunday and kept them miles clear at the top of the league.

The 20-year-old World Cup winner crashed home his 27th league goal of the season, his seventh in as many league games, with 16 minutes left as he continues to shine in the absence of the injured duo Neymar and Edinson Cavani.

PSG now have 80 points, 20 ahead of second placed Lille with a game in hand to boot.

Coach Thomas Tuchel said he was delighted that the runaway leaders have not been tempted to take their foot off the gas.

Mbappe’s goal was the highlight of a dull game which was otherwise lit up by a cheeky PSG fan sneaking onto the pitch to snap a selfie with the striker.

The video assistant referee system ruled out Marquinhos’ tap-in just before half-time after Mbappe was judged offside, and the runaway league leaders threatened little other than that.

However they maintain their huge gap on second-placed Lille, who earlier on Sunday scored three quickfire second-half goals to comeback from 2-0 and snatch a vital win that kept them firm favourites for direct qualification for the Champions League.

Nantes had been finding goals hard to come by but went 2-0 up in front of a packed and raucous Stade de la Beaujoire thanks to a penalty from Valentin Eysseric and a near post header from Kalifa Coulibaly that seemed destined to drag them up to mid-table. But three strikes in seven minutes from Rafael Leao, Nicolas Pepe from the spot and Jonathan Bamba’s fired Christophe Galtier’s gutsy outfit to an impressive turnaround.